Did Mars Ever Have Oceans? 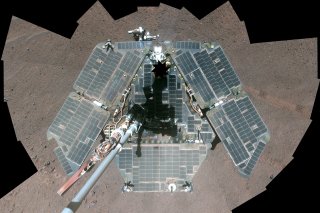 In recent years, it has been often theorized that Mars was once a wet and lush planet, perhaps even a water world. Such views, though, contradict what we see today—a desolate, red-tinged planet that is likely devoid of any life.

Those theories that suggested Mars once had an abundance of water—and the possibility of supporting life—gained more newfound support in a recent study published in Nature Geoscience, which says that there were indeed two unique reservoirs of ancient water that once flowed deep beneath the Red Planet’s surface.

“A lot of people have been trying to figure out Mars’ water history,” Jessica Barnes, lead author of the work, said in a statement.

Barnes and her colleagues studied two meteorites—the Allan Hills and the Black Beauty (Northwest Africa)—that they knew originated from Mars’ crust. These two space rocks contained large amounts of different hydrogen isotopes that the team was able to closely examine. Isotopes are variants of an element with different numbers of neutrons.

Black Beauty was especially helpful because it contained a hodgepodge of surface materials from many different points in the history of Mars.

“This allowed us to form an idea of what Mars’ crust looked like over several billions of years,” said Barnes, an assistant professor of Planetary Sciences at the University of Arizona Lunar and Planetary Laboratory.

From this data, they were able to distinguish between “light hydrogen” and “heavy hydrogen,” which effectively point toward the existence of two different water sources. Moreover, neither rock matches the composition of the planet’s actual crust, which for the team didn’t turn out to be terrible news.

“It turns out that if you mix different proportions of hydrogen from these two kinds of shergottites, you can get the crustal value,” Barnes said.

The variability the researchers were able to discover implies that Mars, unlike Earth and the moon, likely never had a global magma of ocean.