Did Russia's Deadly Su-57 Stealth Fighter Get Ready for 'War' in Syria? 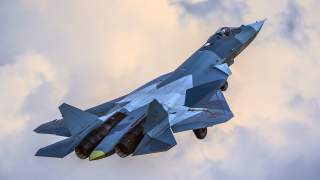 The configuration of the Su-57 is an evolution of the Su-27’s shape adapted for the requirements of low visibility and supersonic speed and agility.

The interesting footage in this post shows Russian Sukhoi Su-57 stealth fighters operating in Syria back in 2018.

Noteworthy as we have already reported the Russian Air and Space Force (RuASF) has deployed the first two Su-57s to Khmemeim Air Base last February.

The configuration of the Su-57 is an evolution of the Su-27’s shape adapted for the requirements of low visibility and supersonic speed and agility.

According to Sukhoi, the Su-57’s radar cross section (RCS) is reduced to an average figure of 0.3-0.4m2 compared to 15m2 for the Su-27. As explained by Piotr Butowski in his book Russia’s Warplanes, Volume 1, the main solution to reduce radar visibility is internal carriage of weapons. Radar blockers reduce reflections from the engine inlet guide vanes and are installed in the engine air intake ducts. The shape of the airframe has been selected to reduce the number of directions in which electro-magnetic waves are reflected, and to ensure these directions are the safest. The angles of sweep for the wing and tailplane leading and trailing edges, the edges of the air intakes and various hatch covers have been reduced to three figures, deflected from the aircraft’s axis. Similarly, in terms of cross section, the fuselage sides, lateral edges of the air intakes and the vertical empennage are all deflected at the same angle. Some openings and slots on the airframe’s surface, for example, the boundary-layer bleeds on the sides of the air intakes and openings on the upper fuselage immediately aft of the cockpit, are covered with a thick grid using a mesh smaller than one quarter of the wavelength of the ‘attacking’ radar, which reduces reflections from these uneven surfaces. Gaps between the airframe elements are filled with conducting sealants, which also reduces RCS. The cockpit glazing is metallised. Radar-absorbing and shielding materials and coatings are also used.

Another group of stealth measures concern the fighter’s equipment. The surfaces of the NO36 radar arrays are deflected from the vertical plane, thus deflecting the enemy radar’s radiation aside. The domes of the arrays are selective — they let their own signal pass through and block other frequencies. In addition, the compartments for these arrays feature radar-absorbent coatings on their edges to absorb ‘freak waves’ (which occur when a wave is amplified after multiple reflections within an enclosed space). In order to reduce their total number, the available arrays are used by multiple systems simultaneously, for example, the radar, ECM and IFF systems. Within the antenna-feeder system, use is made of antennas that do not protrude outside the airframe outlines, and the vertical empennage serves as an antenna for the communications suite. The turret of the 101KS-V sight is rotated backwards in cruise configuration, and its rear hemisphere is covered with a radar-absorbing coating.

This article first appeared in The Aviation Geek Club in December 2018.