Did the Soviet Tupolev Tu-160 Blackjack Copy the Rockwell International B-1 Lancer? 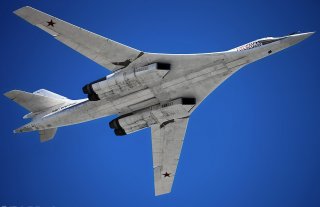 The Rockwell B-1 Lancer is an Air Force supersonic bomber, one developed starting in the 1960s, with the first flight taking place in 1974. The project was canceled in the late 1970s but revived a few years later, and remains a part of the Air Force fleet to this day, even as there have been calls to retire it.

The Tupolev Tu-160 is a Soviet-made bomber, one that first surfaced in the 1970s, and remains in use as part of Russia’s air force.

The two bombers are very similar, leading to questions about whether the Soviet jet copied the American one. This week in the Aviation Geek Club, Dario Leone looked at that very question.

“Sure enough, the Tupolev Tu-160 (NATO reporting name: Blackjack) and the Rockwell International B-1 look quite similar at first glance,” Leone said in an op-ed. “Much has been said about the apparent Soviet custom of copying Western designs; this postulate is rooted in a firm conviction that Russia cannot produce anything worthwhile.”

However, he added that the simulators don’t necessarily mean that one stole from the other, but rather that both used design concepts that were popular at the time- and there remain subtle differences besides.

“Ideas are borne on the wind, as a Russian saying goes; and indeed, faced with similar general requirements and given basically the same levels of aviation science and technology, the two nations were bound to come up with similar results,” he said. “However, a closer look at the two bombers reveals that the Tu-160 and the B-1 are not so similar after all,” he wrote.

Going into history, Leone notes that the Reagan administration revived the B-1 program in the early 1980s in reaction to the Soviet invasion of Afghanistan.

“When President Ronald Reagan entered office he decided to order the B-1 as a ‘near term’ system to bridge the gap between the B-52 (which would be increasingly vulnerable to new Soviet air defence systems) and the ATB, but the order was reduced from the originally envisaged 244 units to just 100,” he said.

The Soviet jet, however, was developed at a different time and under different circumstances. “The Tu-160 escaped the ‘vivisection’ the B-1 had been subjected to, and the aircraft which entered production and service with the Soviet Air Force was exactly what its creators had wanted it to be—a multi-mode aircraft capable of delivering intercontinental strikes within a wide altitude and speed envelope,” Leone said.

In addition, “the B-1B was already fully operational when Tu-160 production in Kazan’ was only just commencing.”

Finally, Leone noted that in 1994, after the Cold War had ended, the crews of both planes met at a fiftieth-anniversary commemoration of World War II’s Operation Frantic, and were invited to examine each other’s aircraft.

There are, several key differences between the craft, he concluded.

“On the B-1 only the horizontal tail is all-movable (the bomber has a conventional fin with a two-section inset rudder for directional control), but the stabilators are augmented by small all-movable canards—the so-called Low-Altitude Ride Control (LARC) vanes, later restyled as the Structural Mode Control System (SMCS)—giving a smoother ride in turbulence at low level,” Leone explained. “The Tu-160 lacks these vanes, since low-level operations are not its primary operating mode. The landing gear design also differs.”