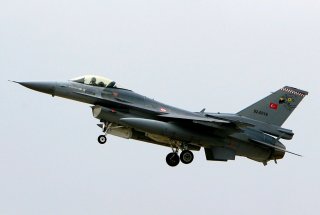 It was in the morning of November 24, 2015, when early warning radars for the Turkish Air Force (THK) were able to detect the take-off of two unknown planes from Khmeimim Air Base.

Sometime later, a Turkish F-16C went on the offensive and shot down a Russian Su-24 attack aircraft—an event that some experts say nearly started another world war.

According to defense writer Dario Leone at Aviation Geek Club, the aircraft were “widely separated” and they “climbed to an altitude of nineteen thousand feet and entered an orbit above the town of Jishr ash-Shughour: one circling south of the southern-most tip of the Turkish border, the other nearly ten kilometers further east.”

He continues: “Because—contrary to agreements between Ankara and Moscow from October 15, 2015—the Russians did not announce this mission close to the Turkish border, the THK was thus unaware of the nationality of the two aircraft. As these went into action and approached the border, and then flew an orbit parallel to it, over the following five minutes the THK issued ten radio warnings on both of the agreed frequencies, demanding them to divert south.”

This precarious event, which was recounted by Tom Cooper in his book, Moscow’s Game of Poker Russian Military Intervention in Syria, 2015-2017, took a turn for the worse “when the Russians failed to react, and then took a course in the direction of Turkish airspace, a pair of F-16Cs airborne on a CAP (Combat Air Patrol) station over the northern Hatay was issued clearance to open fire.”

“The missile proximity fused closely underneath its target, spraying its fuselage and wing with shrapnel. Streaming burning fuel, what transpired to be a Sukhoi Su-24M2 … flipped out of control and plunged towards the ground. The aircraft crashed into the hills about two kilometers south of the Turkish border. … The crew, consisting of Lieutenant Colonel Oleg Peshkov and Captain Konstantin Muratkin, ejected but were almost immediately taken under fire by a group of jihadists,” he adds.

The shooting down of the Sukhoi Su-24 “not only put Russia and Turkey—and thus NATO—on the verge of an armed conflict, but prompted Moscow into an all-out propaganda offensive. The Turkish decision to open fire at aircraft that violated the Turkish airspace for ‘only about two kilometers’ and a duration of ‘only seventeen seconds’ was declared an ‘aggressive overreaction,’” writes Leone.

In addition, he continues, “Turkish attempts to contact the crew before opening fire were all denied, and a fake story about F-16s violating Syrian airspace to down the Su-24 with the help of AIM-9 Sidewinder short-range missiles launched instead: ironically, this proved so ill-devised, that the Kremlin and the Ministry of Defense in Moscow were forced to correct it several times.”

Russia eventually imposed highly effective economic sanctions against Turkey and launched a campaign of isolating the country on the international stage.