Did A Turkish Combat Laser Shoot Down A Chinese Drone? 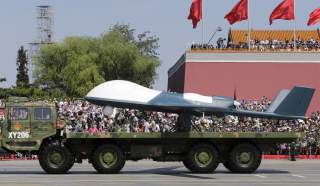 Did Turkey become the first country to shoot down a drone with a laser weapon?

On August 4, a Turkish-made laser weapon destroyed a Chinese-made Wing Loong II, an armed drone that’s China’s equivalent of the U.S. MQ-9 Reaper, according to Alexander Timokhin, writing for the Belgium-based site Army Recognition. Allegedly, the incident occurred during the Libyan Civil War, when Turkish-supported Libyan government forces used the laser to shoot down a Chinese-made drone supplied by the United Arab Emirates to the Libyan National Army, a rebel force commanded by Khalifa Haftar.

“For operators of the UAE-owned UAV Wing Loong II, a Chinese-made aircraft, this was an ordinary reconnaissance and combat mission,” Timokhin wrote. “Their drone armed with an anti-tank missile barraged over the Misurata area, conducting reconnaissance in the interests of Haftar’s troops and looking for targets that could be destroyed by a direct attack.”

“The Turkish installation, which shot down the UAV, is mounted on the chassis of an off-road armored car,” wrote Timokhin. “Like the earlier Aselsan model [a Turkish-made combat laser], it is equipped with a Turkish-made optoelectronic guidance system. The system allows you to accurately inspect the target for firing, to select a vulnerable point, and then hold the laser marker on this point until the target is completely destroyed. Also, as with the previously demonstrated laser gun, a continuous radiation mode is provided, without long interruptions to the "pumping" of the laser. The power of the gun is 50 kW[kilowatts]. This is so far the most powerful combat laser in the Turkish ground combat vehicle.”

Laser weapons are becoming a hot item. The U.S. Army wants to field a battery of Stryker armored vehicles armed with 50-kilowatt anti-missile/anti-drone lasers by 2023. Russia says it has developed a vehicle-mounted combat laser. America and Russia are developing laser weapons for fighters, Germany is working on a laser cannon for its warship, and Israel wants lasers for its Iron Dome missile defense system.

Less well known in the laser game is Turkey, which has aggressively pushed in recent years to develop indigenous high-tech weapons such as drones, tanks—and lasers. There were reports in 2015 that Ankara was working on a combat laser.

Still, there are a few questions about the Libyan incident. One peculiarity is how little attention it has received. A few Web sites—mostly Turkish and Pakistani—featured the Army Recognition article. “For the first time, a combat vehicle armed with a combat laser destroyed another combat vehicle on the battlefield,” Timokhin claimed. “In a real war, on a real battlefield. And no one noticed.” Granted that the Libyan Civil War is a confused conflict between various factions, but there has been no independent confirmation other than the Army Recognition article.

Also puzzling is that Turkey would have risked a sophisticated piece of technology in a messy war like in Libya. Libya offers a chance to test new weapons—as the United States and the Soviet Union did in brushfire conflicts during the Cold War—but it’s not clear from the article whether the Libyan government received such an advanced device, or whether it was operated by Turkish troops (whose intervention on the ground in Libya would raise other issues).

Some will no doubt question whether Turkey could beat the larger military powers in the laser weapons race. But it would be arrogant to assume that smaller nations like Turkey couldn’t create a laser cannon, whose physics are fairly well known by now. As Timokhin rightly points out, “the interesting thing in this whole story is how essentially newcomers to the laser theme occupy that niche in which the ‘grandees’ of laser business, such as Russia and the USA, do not even think to climb.”

Nonetheless, the fact is that U.S. and Russia do have bigger defense budgets and more advanced defense infrastructure to tackle the challenges of a mobile laser weapons, such as ensuring adequate power and reliability. Turkey may indeed have won the laser weapons race, but more proof is needed.