Did a U.S. Navy Fighter Jet Get Video Footage of a UFO? 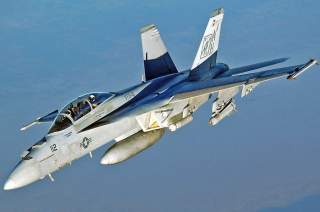 The objects appeared suddenly at 80,000 feet, and then hurtled toward the sea, eventually stopping at 20,000 feet and hovering. Then they either dropped out of radar range or shot straight back up.

The Pentagon has given The New York Times the following video video which shows a F/A-18F from USS Nimitz aircraft carrier – flown by a former CO of VFA-41 Black Aces – encountering an unidentified flying object (UFO) in November 2004.

As explained by The New Yoork Times Cmdr. David Fravor and Lt. Cmdr. Jim Slaight were on a routine training mission 100 miles out into the Pacific when the radio in each of their F/A-18F Super Hornets crackled speaking of a unknown flying object. The voice came from an operations officer aboard the U.S.S. Princeton, a Navy cruiser, who wanted to know if they were carrying weapons.

“Two CATM-9s,” replied Fravor replied, referring to dummy missiles that could not be fired. He had not been expecting any hostile exchanges off the coast of San Diego that November afternoon in 2004.

“Well, we’ve got a real-world vector for you,” the radio operator said, according to Commander Fravor. For two weeks, the operator said, the Princeton had been tracking mysterious aircraft. The objects appeared suddenly at 80,000 feet, and then hurtled toward the sea, eventually stopping at 20,000 feet and hovering. Then they either dropped out of radar range or shot straight back up.

The Super Hornets headed toward the objects. The Princeton alerted them as they closed in, but when they arrived at “merge plot” with the object — naval aviation parlance for being so close that the Princeton could not tell which were the objects and which were the fighter jets — neither Commander Fravor nor Commander Slaight could see anything at first. There was nothing on their radars, either.

Then, Commander Fravor looked down to the sea. It was calm that day, but the waves were breaking over something that was just below the surface. Whatever it was, it was big enough to cause the sea to churn.

According to Fravor hovering 50 feet above the churn was an aircraft of some kind — whitish — that was around 40 feet long and oval in shape. The craft was jumping around erratically, staying over the wave disturbance but not moving in any specific direction, he recalls. The disturbance looked like frothy waves and foam, as if the water were boiling.

Commander Fravor began a circular descent to get a closer look, but as he got nearer the object began ascending toward him. It was almost as if it were coming to meet him halfway, he said.

Commander Fravor abandoned his slow circular descent and headed straight for the object.

But then the object peeled away. “It accelerated like nothing I’ve ever seen,” he said in the interview. He was, he said, “pretty weirded out.”

The two fighter jets then conferred with the operations officer on the Princeton and were told to head to a rendezvous point 60 miles away, called the cap point, in aviation parlance.

They were en route and closing in when the Princeton radioed again. Radar had again picked up the strange aircraft.

“Sir, you won’t believe it,” the radio operator said, “but that thing is at your cap point.”

“We were at least 40 miles away, and in less than a minute this thing was already at our cap point,” Commander Fravor, who has since retired from the Navy, said in the interview.

By the time the two fighter jets arrived at the rendezvous point, the object had disappeared.

The fighter jets returned to the Nimitz, where everyone on the ship had learned of Commander Fravor’s encounter and was making fun of him.

Commander Fravor’s superiors did not investigate further and he went on with his career, deploying to the Persian Gulf to provide air support to ground troops during the Iraq war. But he does remember what he said that evening to a fellow pilot who asked him what he thought he had seen.

“I have no idea what I saw,” Commander Fravor replied to the pilot. “It had no plumes, wings or rotors and outran our F-18s.”

Noteworthy The New York Times ran a story on Dec. 16 on the military’s Advanced Aerospace Threat Identification Program, a covert program to investigate UFO phenomena. The piece quoted Sara Seager, an astrophysicist at M.I.T., who cautioned that not knowing the origin of an object does not mean that it is from another planet or galaxy. “When people claim to observe truly unusual phenomena, sometimes it’s worth investigating seriously,” she said. But, she added, “what people sometimes don’t get about science is that we often have phenomena that remain unexplained.”

Now dear Geeks, we are looking forward to hearing your views: what do you think about the weird object depicted in this post? Is that a UFO or is something that doesn’t have interstellar origins?