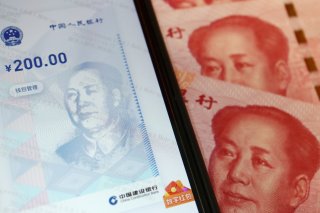 Next February, Beijing plans to debut the digital yuan to the world at the Winter Olympic Games. Will the United States have a digital dollar by the time Los Angeles hosts the Summer Olympic Games in 2028?

The Chinese Communist Party (CCP) has long sought to gain greater monetary influence by internationalizing the yuan. In other words, China would like to borrow from foreigners at low-interest rates, restrict the supply of the yuan to punish rivals, and exploit the “exorbitant privilege” of global reserve status, which the United States alone now enjoys. Research by the International Monetary Fund (IMF) shows the yuan bloc accounts for 30 percent of global GDP, second to the dollar at 40 percent, and much has been said about a digital yuan hastening the dollar’s downfall.

Moreover, China’s aggressive foreign policy and top-down economic control make it unlikely that the dollar will be dethroned by the yuan. China has opened its bond markets to foreign investors and it could encourage natural demand for the yuan by further loosening its governmental controls. But actions such as seizing control of Hong Kong and curbing the growth of its largest tech companies suggests China will pursue an aggressive approach of forced adoption of the yuan in order for the CCP to maintain its market control. This is precisely what precludes China from offering the sort of safe assets and deep, accessible capital markets that are a prerequisite of any international reserve currency.

U.S. policymakers, convinced of the dollar’s enduring role as the dominant global reserve currency, fail to see that digitization may rebalance reserves enough to secure China greater influence in Asia and endow the People’s Bank of China with new advantages. China does not need global reserve status to realize the benefits of increased reserves within the region. It will gain many of the accompanying geopolitical and economic benefits—exerting greater control over neighbors, bolstering Chinese companies in competing markets, and damaging regional U.S. interests—by simply expanding adoption within the current yuan bloc.

Over a hundred countries owe $5 trillion in debt to China, and some of it will be repaid using the current system of SWIFT messages and U.S. correspondent banks. As China continues to extend credit, the ability to conceal its lending and monitor its borrowers is appealing enough that the terms of China’s loan agreements, already obfuscated, may begin to require future payments in digital yuan using its alternative to SWIFT, called CIPS.

In this way, a digital Belt and Road could link together yuan-dependent ATMs and banking services, encouraging greater adoption either directly, by forced participation on CIPS and requirements for yuan-denominated transactions; or indirectly, by creating network effects that make it infeasible to use alternative systems—which, at any rate, the state is unlikely to tolerate.

Greater regional adoption of the yuan means more of it will be held by Asian central banks, further exposing regional economies to the monetary policy of the People’s Bank of China (PBOC). Unlike the Federal Reserve or the European Central Bank (ECB), China’s central bank is not strictly independent of its government. Recent calls to boycott the Olympic Games over the exploitation and subjugation in Xinjiang shine a light on how economic prowess is merging with cultural control under China’s current regime. For yuan-users, the CCP’s regional and political ambitions will easily blur with the PBOC’s economic policy, which could be wielded—and weaponized—in unprecedented ways.

As use of the yuan spreads, the PBOC may take advantage of those dependent on it. After the Asian Financial Crisis highlighted the region’s susceptibility to economic contagion, its crisis management framework began to include currency swap agreements, a form of standing credit line. Used in normal times to settle trade and balance reserves, in a crisis these arrangements are a lifeline to local banks. Tapping regional central banks for credit means they do not have to reach out to the IMF or other international organizations, and local banks have come to expect that central banks will provide this liquidity.

But China’s willingness could change with its evolving ambitions. Moreover, as digital currencies enter the mix China can dictate the protocols for their interoperability. Easy credit may be extended to Iran, which could be permitted to issue a digital rial, while a country such as Taiwan is starved of liquidity and forced to adopt the digital yuan.

China may intervene as a practical matter. Increasing reserves of the yuan put upward pressure on its value. A strong yuan raises the prices of China’s goods relative to goods produced by other exporting countries. There’s little doubt that a digital yuan would be manipulated to retain a competitive edge for its export producers and limit the growth of rival exporters.

In response to the pandemic, China’s relatively small stimulus propped up specific industries through structural monetary policies that risked making entire sectors dependent on the PBOC. With the ability to send yuan to digital wallets across the region, the PBOC could take a similarly selective approach to future crisis relief by issuing funds to foreign economies viewed favorably by the CCP at the risk of making entire foreign economies dependent on its generosity.

For these reasons, few desire a dominant yuan. However, many central bankers still hope to dampen the dollar’s power. The Bank of England’s Mark Carney has called for a single supranational currency to supplant the dollar and suppress the yuan. While fanciful, his idea echoes the frustrations with the status quo among U.S. allies and rivals alike, but there are few alternatives to dollar dominance.

Concentrating power in any hegemon has consequences for global financial stability. If an economic shock, political instability, or profligate debt issuance caused creditors to lose faith in the United States, a run on the Federal Reserve may occur, which would certainly trigger a global crisis. It can be argued that a few powerful central banks overseeing clearly divided, equally balanced currency blocs would reduce exposure to any one bloc’s policies and help contain a financial crisis from spreading.

But such a fractured network complicates global trade, and research suggests a multipolar system is a less stable system with fewer reserves overall. With multiple safe assets to choose from, economies flit quickly between different currencies attempting to find the safest one—not unlike the volatility of reserves seen during the transition between the pound sterling and the dollar after World War I.

Although the European Union may like to compete for reserves, the ECB has not taken the necessary steps for the euro to become a global reserve currency, instead choosing to focus on domestic policy and stability within its bloc. With eight members refusing to use the euro, the European Union is already a multi-currency bloc challenged to effectively implement monetary policy across its twenty-seven member states. If it can prevent further currency defection, a digital euro might facilitate monetary policy, but first the ECB must persuade Germany, its largest shareholder.

Although the ECB’s negative interest rates currently see them swimming in deposits, Germany’s ailing banks risk losing much of them in the move to a digital euro. Because retail deposits of digital currencies at central banks take away from their lending base, private banks have floated a cap on the amount that each citizen can hold at the central bank or penalizing balances over a certain threshold.

Buy-in from banks is also crucial for a digital dollar, as digitizing wholesale cross-border payments depresses the correspondent banking business, an attractive revenue stream for an industry challenged by emerging technology. The G20’s Financial Stability Board recently called for public-private collaboration to simplify the cross-border payment process, but private sector partnerships could go further in the United States.

China issued a digital yuan to circumvent competition from foreign companies, such as Facebook, and to check the duopoly power of AliPay and WeChat at home. With an independent monetary authority that relies on the private sector to facilitate its policies, the United States should not view private or nonstate currencies as a threat, but as an opportunity.

The United States should tap the private sector to update payments systems and help issue a secure digital currency. Private sector developers would welcome co-developing a digital currency that grants the privacy assured by cryptocurrencies and stablecoins with the stability of central bank currencies. Doing so is not far-fetched. Governments want to be able to track money laundering and tax evasion; developers could let private banks vet customers before they can open their digital wallets without monitoring the spending of the dollar itself.