The Dire State of America's Icebreakers 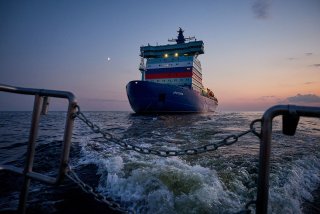 The American icebreaker fleet is in a dire state, and its future offers little hope for change. Currently, the Coast Guard’s fleet of icebreakers stands at a total of two vessels—the USCGC Healy, which is currently inoperable due to a catastrophic engine fire, and the USCGC Polar Star, a vessel originally commissioned in the 1970s. Compared with the Russian fleet, operating in excess of forty such vessels, the United States is utterly dwarfed in its capacity. Indeed, the American fleet is more comparable to that of China, which possesses only two ships, with a third currently under construction.

Plans do exist to replace the aging vessels currently in use by the Coast Guard, but even in their replacement, America falls short. The current plan for the replacement and expansion of its icebreaker fleet comes in the form of the Polar Security Cutter (PSC) program, and it is remarkably limited in its ambition. Furthermore, the project faces the issue of not even being fully funded, with funds having only been allocated for the first ship, and even then, by allocating funds from another branch of the armed forces.

First, the plan calls only for three heavy and three medium vessels, which would triple the size of the current U.S. fleet but still pale in comparison to the Russian fleet. Furthermore, the vessels will all be strictly diesel-electric in their powerplant, contrasting with the nuclearized designs of much of the Russian fleet. Lastly, and perhaps most egregiously, the PSC is not even a wholly American design, with Washington instead opting to build off of the design of the German RV Polarstern, evolving it into a more modern design. Regardless of whether this represents an unwillingness or inability of the United States to design its own craft is concerning all the same.

For a nation as economically vigorous as the United States to settle for diesel-electric propulsion is puzzling, both when regional competitors employ nuclear power and when another branch of its own armed forces, the U.S. Navy, makes extensive use of nuclear-powered vessels. The work of Russian engineers in developing nuclear-powered icebreakers as far back as the mid-twentieth century highlights that the obstacle to the United States possessing a similar fleet is not a technological one, but is rather wholly political.

Much of the issue here is a regulatory concern, and it is something that should have been resolved decades ago. Many ports are hesitant to play host to nuclear vessels out of overplayed concerns about safety—which is ironic, considering the atomic footprint of nuclear power compared to coal, which actually releases more radioactivity into the environment than a well-run modern nuclear reactor.

For a Biden administration that truly wishes to commit both to secure America’s Arctic frontier and combating the effects of climate change, a nuclear-powered fleet of icebreakers presents a straightforward path to achieving both goals.

First, to truly ensure American security and the free movement of maritime traffic through the Arctic, a fleet of reliable, well-designed, and safe icebreakers is a must, especially as traffic through the region will only increase as the polar ice grows smaller in volume with each passing year. The scientific and military commitments upheld by U.S. Coast Guard operations in the Arctic would be greatly supplemented by nuclear-powered vessels that could not only operate in the seas for many times longer than their conventionally-fueled counterparts but move at greater operational speeds, enabling them to more rapidly respond to any emerging situations.

Secondly, any administration that wishes to enshrine environmentalism as one of the cornerstones of its overall strategy would benefit by possessing the most advanced fleet of nuclear icebreakers, which are able to operate with no greenhouse gas emissions whatsoever. Some may have concerns over the safety of nuclear-powered ships in so hostile a climate, but as is evidenced by the many expeditions of the U.S. Navy’s nuclear submarine fleet to the Arctic, such safety guarantees are well within the engineering capabilities of the United States.

One major concern would be the reactor maintenance crew themselves. Since the Coast Guard does not presently operate any nuclear-powered vessels, it would be necessary to establish training programs to ensure the force’s ability to train the next generation of nautical nuclear engineers. One such approach would be using existing Naval personnel as trainers for Coast Guard reactor personnel while new nuclear-powered ships were being built. After receiving their own training, these Coast Guardsmen would then be able to teach other members of their service, eliminating the problem of training in hopefully a few years. By the time the new nuclear icebreakers come online, their crews would be trained and ready to serve.

Furthermore, as the Coast Guard’s current fleet of icebreakers is based out of Seattle, it may be prudent to lay out plans for the construction of secondary facilities closer to Arctic areas of American interest, such as Anchorage, Alaska. Doing so would again allow for more flexibility in responding to rapidly evolving situations and provide stimulation to the local economy.

With current U.S. Arctic strategy lacking in vision and ambition, new plans for an American presence in the nation’s northernmost frontier are not matters for idle consideration—they are a necessity for any administration that wishes to take the nation’s security concerns seriously and commit to ensuring regional stability for decades to come.

Brandon Walls is an undergraduate at the University of California, Davis.