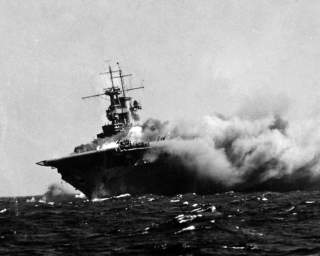 Key Point: The demands of the treaty instilled a number of weaknesses in Wasp. Armor was extremely light for a peacetime aircraft carrier, with machinery, magazines, aviation fuel, and rudder control all covered by a maximum of 4 inches of armor. Vital spaces in the island only had only .75 inches of armor, and the conning tower had just 1.5 inches of armor.

USS Wasp (CV-7) was authorized by Congress in March 1934, at the height of the Great Depression, laid down in April 1936, launched in April 1939, and commissioned in April 1940. The Navy tried to fit as many features from the larger Yorktown-class carriers into Wasp, but the latter was a full 5,000 tons smaller than the former, and adding all of them was physically impossible. The smaller carrier was relatively modest by the standards of fleet carriers. CV-7 was 688 feet long at the waterline with an overall length--including flight deck--of 720 feet. She had an overall beam of 109 feet, weighed 14,700 tons empty and 19,000 tons fully loaded.

The demands of the treaty instilled a number of weaknesses in Wasp. Armor was extremely light for a peacetime aircraft carrier, with machinery, magazines, aviation fuel, and rudder control all covered by a maximum of 4 inches of armor. Vital spaces in the island only had only .75 inches of armor, and the conning tower had just 1.5 inches of armor. Other issues included a Wasp had a unique round bottom, a hull strengthened only to the hangar deck, and the ship was the “last combatant ship to have a transversely framed hull”. As a result, Wasp was uniquely susceptible to damage and the ship’s best bet to avoid sinking in combat was to outmaneuver the enemy.

Another major problem with Wasp went undiagnosed until the fatal attack that sunk her in 1942. Although the Navy had judged her as having excellent firefight capabilities, these came up short during an actual attack. The ship was ultimately done in by out of control fires that the crew was unable to control. A wartime report prepared by the Navy blamed Wasp’s poor firefighting efforts on a combination of poor water pressure, damage to existing fire fighting facilities, other fire fighting facilities that came up short, and the existing gasoline stowage system, which was active, that fed the fires.

This article first apperaed in March 2019. It is being republished due to reader interest.