Disasters In the Making: Boeing 737 Max 8 and Lac-Mégantic 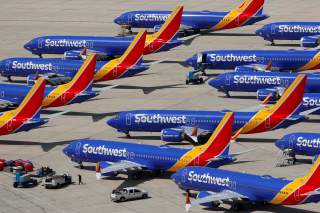 Canada has reportedly still allowed Boeing 737 Max 8s to fly even after they were grounded almost a year ago. This news emerges despite the fact that crashes involving the plane — Lion Air in Indonesia in October 2018 and, five months later, Ethiopian Airlines in Addis Ababa — killed 346 people, including 18 Canadians.

There are some disturbing similarities between the Boeing Max 8 scandal and the July 2013 Lac-Mégantic rail disaster. Both reveal a predictable pattern.

In Lac-Mégantic, a runaway train laden with volatile Bakken shale oil from North Dakota crashed in the heart of the small Québec community, killing 47 people, orphaning 26 children, spilling an unprecedented six million litres of oil and incinerating the town centre. It was the worst industrial disaster on Canadian soil in a century.

Both disasters were the deadly consequence of a decades-long trajectory of deregulation in the aerospace and railway industries. Safety precautions were systematically eroded to the point where the likelihood of an accident became a game of Russian roulette: not if, but when.

In both cases, regulatory agencies were captive to their regulated industries. A revolving door of senior agency officials — moving from industry to regulator and back to lucrative industry lobbyist positions — aided and abetted the deregulation process.

In both cases, lower-level regulatory staff opposed regulatory outsourcing measures, warning against the fox guarding the henhouse. They were ignored or reprimanded for speaking out.

With Canadian railways, the implementation of a safety oversight regime, called safety management systems or SMS, sealed the transition to company self-regulation.

This happened at a time of looming danger posed by the exponential increase in the transportation of oil by rail. There were multiple critical evaluations of the system, including by the Auditor General of Canada, who concluded in a 2013 report:

“The Department’s level of oversight was not sufficient to obtain assurance that federal railways have implemented adequate and effective safety management systems.”

In both Canada and the United States, regulatory agencies have also experienced major budget cuts, layoffs and an exodus of trained personnel, eroding their ability to do independent evaluations of company practices.

In both the railway and aerospace industries, safety was increasingly subordinated to shareholder value as Wall Street investment funds — focused on short-term returns — came to dominate corporate decision-making. This was aggravated at Boeing by competition pressure from Airbus.

Both the Canadian and U.S. governments implemented red-tape reduction regulatory policies, which have forced regulatory agencies to offset each proposed new regulation by removing one (two in the U.S.) or more existing regulations that constitute a cost to business. This serves to further sideline safety.

The primary cause of the Boeing crashes was faulty stall-prevention software and malfunctioning sensors. The 737 Max 8 pilots’ manual contained no information regarding its new software. This was done to convey (falsely, as it turned out) to airlines that they didn’t have to engage in costly pilot training for the Max 8.

The Federal Aviation Administration (FAA) also allowed Boeing to self-certify its aircraft. Within Boeing, engineers criticized the software, which was developed offshore by inexperienced, low-wage designers. In the words of one Boeing engineer, the 737 Max 8 was “designed by clowns … and supervised by monkeys.”

In Lac-Mégantic, in the wake of a railway-drafted loophole in the operating rules, Transport Canada granted permission to Montréal Maine and Atlantic — a company obsessed with cost-cutting with a poor safety record that later went bankrupt — to operate its massive oil trains with a single crew member.

It was granted and aggressively supported by the railway lobby over opposition within Transport Canada, including the inspectors’ union. Furthermore, Transport Canada ignored warnings of its own commissioned National Research Council report stressing the need for numerous safety precautions before allowing single-person crews.

Canadian Pacific, which was contracted to haul the volatile cargo to the Irving oil refinery, chose to subcontract with Montréal Maine and Atlantic, with a line running through Lac-Mégantic, rather than choosing a safer but less profitable route in conjunction with Canadian National.

In the aftermath of both the Boeing and Lac-Mégantic disasters, industry executives blamed the pilots and the locomotive engineer respectively. In both cases, the decks were stacked so heavily against these employees that catastrophe was a foregone conclusion.

Canada and the United States were the last countries to ground the Boeing 737 Max 8. In the U.S., a criminal investigation of the FAA approval is underway. A congressional investigation into the crashes is also ongoing.

Despite pleas from the victims’ families, Canada has so far declined to hold an independent public inquiry into the Boeing crashes.

Transport Canada was obligated to double-check the U.S. certification of the aircraft. Did it exercise due diligence, or did it simply rubber-stamp the FAA certification? Why was it not given information regarding the existence of the stall prevention software system on the Max 8? Why was it not provided the risk analysis done by U.S. Department of Transport experts who determined that the Max 8 had a vastly greater likelihood of crashing than other aircraft?

In Canada, criminal charges were laid against three front-line railway workers in the Lac-Mégantic disaster; they were subsequently acquitted. No company executives or owners were charged, despite substantial evidence of corporate criminality. No senior government officials or politicians have been held responsible.

Two parliamentary investigations into the Lac-Mégantic disaster had limited mandates. The Transportation Safety Board investigation left many unanswered questions, foremost among them: Why did the final report erase six causes in the original investigatory report related to the decision to allow a delinquent company to operate with a single-person crew?

Responding to the recent shooting down of the Ukraine Airlines plane in Iran, which claimed the lives of 57 Canadian citizens, Trudeau rightly stated:

“The families of the victims want answers. I want answers. That means closure, transparency, accountability and justice. We will not rest until we get that.”

The 737 Max 8 victims’ families also deserve justice. The Lac-Mégantic victims’ families are still waiting for justice, seven years after the tragedy. Canadian Pacific is still in court refusing to acknowledge its role and responsibility. More recently, CP has also refused to investigate its own alleged criminal negligence into the runaway crash in the Rockies, which killed three workers a year ago this week.

The pattern of corporate negligence and regulatory failure that produced these disasters is clear. Repeating the promise, as made by Transport Minister Marc Garneau, that “safety is my No. 1 priority,” doesn’t mean much unless it is accompanied by concrete government actions. If not, more tragedies are all but a certainty.