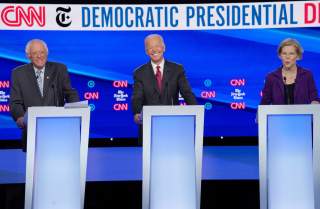 The Democratic National Committee and journalists at PBS worry Politico’s choice to moderate December’s Democratic debate will be too conservative for the likes of the party, NBC reported Monday.

Alberta once wrote for National Review, a conservative magazine.

PBS journalists Judy Woodruff, Yamiche Alcindor and Amna Nawaz are being considered for the job. DNC officials believe Alberta is out of step to co-moderate a debate meant to introduce the Democratic candidates to the American public, NBC reported.

To make the sixth debate stage, Democratic candidates will need to hit more stringent requirements than was asked of them in previous debates. They must hit 4% in at least four DNC-approved early voting state polls or receive 6% support in Iowa, New Hampshire, South Carolina or Nevada.

The fifth debate is scheduled for Nov. 20 in the Atlanta, Georgia. Candidates must hit 3% in four national or early state polls and have 165,000 donors to qualify. Neither PBS, Politico, nor the DNF have responded to the Daily Caller News Foundation’s request for comment.