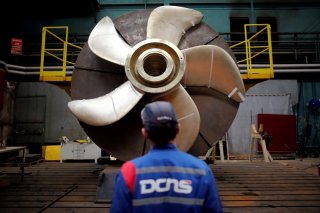 Submarines are so vital to Australia that two of our past prime ministers have publicly pointed to the nuclear-powered option.

Shifting from the conventional power of the existing Collins class and the planned Attack class to nuclear propulsion would take the subs saga to a whole new depth.

Before reading the nuclear-powered musings of Tony Abbott and Malcolm Turnbull (a rare meeting of minds), turn to the other part of the proposition: subs are vital.

A couple of episodes into this five–part series, I got a note from one of the smartest men I know—an economist with a long history in the Canberra policy jungle and an equally deep understanding of East Asia. He is a master at posing the simple Delphic question that forces lots of devilish detail through its paces.

And so my master posed this question:

Although I try to take an interest in these things, I really don’t know why Australia needs submarines. What—exactly—do we want them for? I really don’t know. We’re spending at least $100 billion (probably more) on something which somebody like me has no idea what it’s for. I’ve been keeping an eye on the literature. This matter—i.e., what we actually get from the submarines—doesn’t seem to be explained. I guess I’m slow, right? But my bet is that I’m not the only one.

A fine reminder of an enduring truth: the Canberra defence consensus isn’t always what the rest of Oz understands or believes.

Whenever military types berate me for the ignorance of journalists about defence, I respond they should be grateful to us: we’re merely showing them how much the rest of the population lives in a different place with a sky of a different colour.

On why subs are vital, turn to two politicians responsible for explaining defence to the voters.

Submarines are fundamentally important to our defence strategy. They are a unique—and powerful—deterrent to any adversary, and they are critical to protecting our national security interests. Submarines secure Australia’s strategic advantage—through leading-edge surveillance and the protection of our maritime approaches.

Our sophisticated level of interoperability with the United States is a critical aspect of our submarine operations in our region. As are our air warfare destroyers and also anti-submarine warfare frigates. Submarines are also the vanguard of strategic lethality and deterrence. With substantial firepower, with stealth, with endurance and also with sustained presence.

Our regionally superior Collins-class submarines are already very capably demonstrating all of these effects. We will see further refinements to our future Attack-class submarines—ones that will strengthen our capability to maintain peace and security in our region.

Australia having the power to deploy this capability, with its lethality, a long way from our shores is the single biggest question mark that we can place in any adversary’s mind. So, when we buy a submarine, we buy that question mark. They are a powerful deterrent. And more than any other military platform that Australia has today, submarines can shape our strategic circumstances in a way which empowers our nation and gives Australia sovereignty.

Because subs are so important, our two previous prime ministers—united in little but their hatred for each other—agree on the need to consider nuclear-powered subs.

Turnbull writes that shortly before his prime ministership was rudely interrupted he’d taken the nuclear subs out of the too-hard basked and started to investigate: ‘My judgement then, and today, is that this is a debate that will continue, so the government should make sure it’s well informed.’

Abbott declared in 2017 that the taboo must be tackled: ‘Australia has not made a formal decision against acquiring nuclear-powered submarines, so much as studiously avoided even asking the question.’

Recalling that Abbott’s prime ministership crashed a few days short of the two-year mark, it’s remarkable he proclaims his biggest regret from that time as PM was not challenging the nuclear-no-go mindset:

In the Abbott government’s discussions about getting the best possible submarine for Australia as quickly as possible, we more or less assumed that our (currently limited) nuclear engineering capacity precluded that option.

Creating a nuclear industry to service subs here would take a decade, perhaps more, yet might turn out to be a lesser challenge than designing and building a new class of submarine almost from scratch. Within the 15-plus years that it’s currently planned to take to get even the first of our new conventional subs into service, we could develop a nuclear servicing capability—and if we were to buy or lease a US submarine it could initially be supported at the American bases in Guam and Hawaii.

In the 1960s, we relatively swiftly developed a civilian nuclear capacity, mainly for medicine, centred on the Lucas Heights facility in Sydney. So it can be done if the will is there.

Turnbull says any country with a nuclear navy has to have a civil nuclear industry. Australia would have to justify that shift as ‘support for the navy rather than its offer of cheap electricity. It would need long-term, bipartisan support and well over a decade would be needed to establish the pool of skilled personnel in every field to support it.’

The two former prime ministers confront the question of whether the US would sell or lease nuclear-powered subs to Australia. Abbott says we won’t know if we don’t ask:

The US already provides Australia with its most advanced aircraft and tanks and its most sophisticated submarine torpedo weapons system. The US has previously provided Britain with its most sensitive nuclear submarine technology …

We have nothing to lose from starting a discussion on this issue with our allies and friends—Britain and France—as well as primarily with the US.

Turnbull, however, embraces the view that leasing US subs would mean Washington has an effective veto over an Australian capability—especially if the boats had to go to Guam or Hawaii for maintenance:

There’d be no point in us having a nuclear navy if it wasn’t completely sovereign and able to be operated by, and at the direction of, the Australian government. That means the submarines and their nuclear power plants would have to be maintained in Australia.

With France, Australia is building Attack-class submarines that are cousin to the French Barracuda nuclear-powered boats. And that nuclear capability is one element in Australia’s decision to partner with France rather than Germany or Japan, as Turnbull states: ‘It wasn’t the reason for the choice, but accepting the French submarine bid, as opposed to the Japanese or German bids, at least gives us a potential option to move to a nuclear design in the years ahead.’

Reaching for that option would confront many dimensions of Australia’s nuclear taboo. The Labor and Liberal parties would have to agree. The people would have to be persuaded. There’s the small matter of building the nuclear industry. And we’d have to do a lot of talking and explaining to the neighbours—especially Indonesia.

All that could only happen in a darkening strategic environment. It’d be ‘a post-Covid world that is poorer, that is more dangerous, and that is more disorderly’. The quotation marks around that poorer, dangerous, disorderly quote are because that’s what Prime Minister Scott Morrison described in launching the 2020 strategic update.