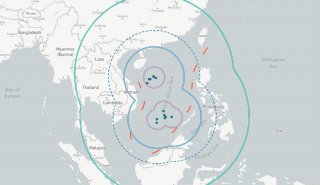 An interesting interactive illustration from a prominent think tank appears to raise the question as to the extent to which China already controls the majority of the South China Sea.

The map, presented by the Center for Strategic and International Studies (CSIS), shows China’s fighter jet, bomber, radar and missile reach across the South China Sea, demonstrating that very little to none of the region is outside of China’s threat envelope.

For example, the map indicates that the range of Chinese fighter jets completely encircles the South China Sea, stretching from mainland China down around the Philippines to the Southern parts of SouthEast Asia. China’s bombers, radar, anti-ship cruise missiles and air-defenses also have extensive reach spanning across wide swaths of dispersed terrain.

For instance, the map shows an area in the South China Sea called Fiery Cross Reef which has shelters equipped for mobile missile platforms and hangars sufficient to house 24 combat aircraft. This kind of placement offers China the ability to reach, cover and potentially attack virtually all areas of the South China Sea quickly.

“A KJ-500 airborne early warning and control aircraft was seen on the island in 2020,” the CSIS map says.

Does this mean that U.S influence and activity in the area is constrained? At risk? Or merely challenged when it comes to operating in the area to assert freedom of navigation and counter China’s controversial and provocative territorial claims?

Taken individually and collectively, each of the factors may not seem to fully restrict U.S. missions, patrols, training exercises or interoperability maneuvers with allied platforms. U.S. stealth fighters and bombers are built to operate in high-risk or contested areas by relying upon speed, altitude and stealth to elude detection from enemy air defenses.

Navy surface ships travel with integrated layered defenses engineered to find and knock out incoming ballistic missiles or anti-ship cruise missiles and the presence of Chinese fighter jets in contested areas by no means ensures Chinese air supremacy in the region.

For instance, the U.S. consistently operates drone flights, surveillance plane missions and bomber patrols in and near the area, suggesting that China’s reach and influence, while significant and disturbing to U.S. leaders, does not amount to what might be termed “operational control” of the area.

What it does show, however, is that in the event of a conflict, there would likely be risks of major power warfare engagement, as opposed to a small exchange of fire. The possibility of rapid escalation would be very high.