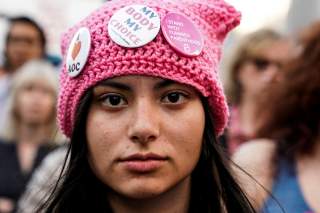 In 1976, conservative Congressman Henry Hyde of Illinois introduced a bill that would ban the use of federal funding for abortion expenses except in instances of rape, incest or danger to the life of the mother.

Today, the Hyde Amendment, which has been added as a rider to federal budget appropriation bills since 1977, prohibits abortion coverage for approximately 74 million Medicaid recipients.

It also prohibits the federal government from covering abortion in health programs for federal employees, federal prisoners, those who rely on Indian Health Services, active military members and veterans, among others.

I’m a social work health scholar who studies vulnerable people’s access to reproductive health care. Now that the Hyde amendment has become a focus for some candidates in the 2020 presidential election, I believe it’s important to understand who it affects and how it can be repealed.

At the amendment’s inception, Henry Hyde noted his inability to restrict abortion for everyone and said he would have to settle for impeding access for poor women.

In its current form, the amendment primarily affects poor people, people of color and those who are young.

In fact, the majority of those who have abortions in the U.S. are adolescents and young adults with limited financial resources.

My own research shows that adolescents in a sample of people who could not afford abortions were more likely to identify as black or African American, compared with adults in the same sample.

So, does the amendment prevent abortions, as Sen. Hyde intended it to do? It’s hard to say, because we have no data showing how many people who are served by federal health programs get abortions without using their insurance.

However, the Guttmacher Institute estimates that between 18% and 37% of Medicaid recipients who carried unwanted pregnancies to term did so due to an inability to pay for desired abortions.

Abortion opponents view this as evidence of Hyde’s success, but research indicates that there are varied and serious public health impacts for those who are denied abortion and for their children. These include poverty, greater reliance on public assistance programs and child development delays.

My research highlights the ways Hyde disproportionately affects marginalized populations that have the most difficulty affording abortion.

Abortion funds are organizations that provide financial assistance to help pay for abortions. My research indicates that the majority of people assisted by these organizations are young people of color who are already parenting at least one child.

Some states, such as New York and California, use their own funds to go around the Hyde requirements and include abortion services for Medicaid recipients. Unsurprisingly, I found that people who received private financial assistance to help with abortion costs were more likely to live in states that had not expanded their Medicaid programs to cover abortions.

Hyde has survived for more than 40 years because historically there has been bipartisan support for the amendment in Congress, and there is certainly not a road to repeal when Republicans hold a majority in the Senate.

That said, eliminating Hyde is straightforward. Because the amendment is added as a rider to the budget appropriation each year, all that’s required is to vote for lawmakers who will end this practice. Moving forward, that would permit abortion coverage in federal health programs.

Some officials are taking an active approach to repeal. For example, Alexandria Ocasio-Cortez introduced a petition to repeal the amendment. In March, several Democrats reintroduced the Equal Access to Abortion Coverage in Health Insurance Act, which would allow federal insurance programs to cover abortion.