Does Russia Already Have an Air-Launched Hypersonic Missile? 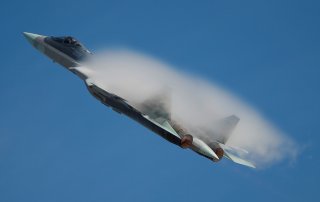 The U.S. Air Force plans to fire hypersonic weapons from its now operational F-15EX aircraft, a plan which most likely applies to a wide sphere of platforms to possibly include the F-35 and F-22 jets among others. The hypersonics weapons race, fueled by a vigorous, accelerated U.S. effort within just the last few years, is defined by an intense competition between Russia, China and the United States, which some pose the question as to whether the United States has fallen behind. Regardless of the particular maturation of each country’s hypersonic weapons, it is clear that they promise to change existing warfare paradigms with new levels of range, speed and precision.

Does Russia already have an air-launched hypersonic missile? While it might not surprise many if Russian newspapers were to exaggerate or hype the performance of some of its new weapons, a report last year in Russia’s RIA Novosti quotes unnamed sources who claimed to have seen a Russian fifth-generation Sukhoi Su-57 carrying a prototype “hypersonic weapon.” The report said the missiles used in the tests of the Su-57 stealth fighter jet were “functional, full-size mock-ups,” but not yet launched. The RIA Novosti report adds that the “dummy missiles lack a propulsion system, fuel and warhead but are otherwise identical to the real weapon in terms of weight and dimensions.”

The source cited in the Russia paper also says that test versions of the weapon include “seeker heads and electrical circuits.” The paper adds even more detail about the new weapon, describing it as “a compact, air-to-surface weapon intended to destroy adversary air and missile defense systems, and cruise and ballistic missile launchers.” If the Russian report is true, then it would have marked the first-of-its-kind event wherein a fifth-generation aircraft operates with an air-to-ground hypersonic missile.

Russian fighter jets are also reported to have air-launched hypersonic weapons, according to a U.S. newspaper report in TheDrive. The report, from earlier this year, said the weapon is called the Kinzhal aero-ballistic missile system. “The Kinzhai combines a modified MiG-31 Foxhound interceptor with the Iskander surface-to-surface missile, which has reportedly received the NATO codename Killjoy in its air-launched form,” TheDrive reports.

Air-launched hypersonic weapons are typically launched by a scramjet to achieve the acceleration needed to reach and sustain hypersonic speeds. The U.S. Air Force has had some success with scramjets having several years ago fired its X-51 waverider hypersonic drone from a B-52 stealth bomber.

Fighter jet-launched hypersonic weapons, however, would introduce new threats for U.S. defenses, as the principle reality associated with enemy hypersonic weapons is simply that they are extremely difficult to defend. Long-range, ship-launched or even intercontinental hypersonic weapons can already travel unparalleled distances in minutes, exponentially decreasing flight time to target, so fast-maneuvering stealthy fighter jets attacking with hypersonic missiles would provide defenders with even less time to respond to an attack before being hit.

A fifth-generation fighter jet would bring an ability to maneuver much closer to target areas, presenting unanticipated complications for defenders hoping to stop hypersonic attacks. When it comes to defending hypersonic weapons, however, there is much work being done by the Pentagon. Some of these involve new innovations related to disrupting the airflow or “boundary layer” surrounding hypersonic weapons, using laser interceptors as they travel at the speed of light or even using hypersonic interceptors themselves to hit approaching hypersonic attacks. All of these methods of course will rely heavily upon high-speed methods of threat detection and sensor data analysis.

There already are several emerging and tactically relevant air-launched U.S. weapons, including the Long Range Anti-Ship Missile and bomber-launched cruise missile, the Long-Range Stand-Off weapon. An air-launched weapon moving at hypersonic speeds, while likely on the developmental radar, may not yet be operational. At the same time, the level of maturity of this reported Russian air-launched hypersonic weapon may be largely unknown to foreign observers.