Does Russia Really Have Hypersonic Weapons That Are 'Operational'? 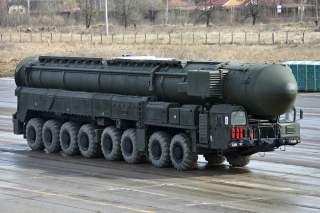 The Russian defense ministry claimed it has deployed the Avangard surface-to-surface hypersonic missile, possibly making Russia one of the first countries to field an operational guided missile capable of traveling faster than five times the speed of sound.

TASS news agency, which is controlled by the government, called the deployment a "remarkable event.”

“No existing defenses, in the United States or elsewhere, can intercept a missile that can move so fast while maneuvering unpredictably,” Steven Simon, an analyst for the Washington, D.C. Quincy Institute, wrote in The New York Times.

Staying relatively close to Earth — around 300,000 feet up, approximately where the atmosphere ends and space begins — a hypersonic vehicle glides toward its target at many times the speed of sound, potentially performing small maneuvers while en route.

The U.S. Army's Ground-Based Midcourse Defense missiles in Alaska and California represent America's main defense against nuclear-armed ballistic missiles. But the GMD rockets lack the speed, maneuverability and accuracy to hit an ICBM, which in its final phase of flight can reach a velocity 20 times the speed of sound.

With Avangard reportedly combat-ready, Russia competes with China to be the first country to deploy a hypersonic weapon. China in October 2019 publicly debuted its DF-17 hypersonic surface-to-surface missile during a military parade in Beijing.

It’s unclear whether the DF-17 actually is operational. It’s also unclear how many DF-17s China possesses and how it plans to use the missiles during wartime. Most importantly, it’s not obvious that China has built a sensor network capable of selecting targets for the DF-17.

David Larter in a November 2019 column in Defense News cautioned against assuming the DF-17 and other hypersonic missiles are transformative. “The catch is that none of this stuff works yet,” Larter wrote. “I want to emphasize that all of what we’re talking about here are prototypes.”

The United States is developing its own hypersonic missiles and aims to deploy them in the early 2020s.

In rushing to be first, Russia and China could end up fielding unreliable hypersonic weapons. In July 2018, Griffin asserted that the United States remained the world leader in hypersonic-weapons research. The Pentagon determined there was no need to hurry up and equip troops with an unrefined weapon.  "We didn’t see a need for it."