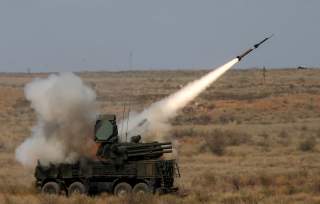 Key point: It is still unclear just how reliable the Pantsir S-1 is.

In November 2018, Viktor Murakhovsky, a writer for the Russian publication Arsenal of the Fatherland, posted a comment regarding the performance of Russia’s Pantsir S-1 air-defense system.

“In Syria, it turned out that the Pantsir was practically incapable of detecting low-speed and small-sized targets, which include military UAVs. At the same time, the complex regularly recorded false targets—large birds flying around the base—rather confusing the operators.”

Shortly afterward, Murakhovsky’s post disappeared. Some observers speculated there may have been pressure to silence negative press for a system Russia has already exported to Algeria, Iraq, Oman, Syria and the UAE. Others dismissed Murakhovsky’s claim for relying on an anonymous source

As inexpensive drones have entered widespread use with both military and insurgent actors across the globe, SHORADS have grown in importance.

But the anonymous source Murakhovsky cited claimed the Pantsir performed poorly against drones compared to the older and more expensive Tor-M2U missile system.

“In a real combat situation, the Pantsir does not justify the hopes placed on it,” the source explained. “On July 1, [2018], the first drone attack occurred, and three drones from the group were able to fly up to the Russian base and drop nine makeshift explosive devices. Immediately after the start of the attack, the Tor-M2U crew detected the targets and destroyed four drones with five ground-guided missiles at altitudes between 2.5 and three kilometers. Another three drones were shot down by the Pantsir-S1, but it used 13 missiles to do so.”

“During the second half of July 2018, the Tors in Syria destroyed seven UAVs with nine missiles,” the source continued. “In August 2018, the Tors detected and shot down another eight UAVs, expending a total of nine rockets. In the period from April to October 2018, the Tor-M2U complexes in Syria shot down 80 air targets, with an efficiency of 80 percent.”

“Meanwhile, the efficiency of the Pantsir-S1 during the same period was only 19 percent.”

It’s unclear whether the source’s claims are true.

“Murakhovsky was responding to an article that was likely planted by manufacturers of Tor,” Michael Kofman, a Russian military expert at the Center of Naval Analysis, told War Is Boring in an email.

“Russian defense industry and military journals have no problem criticizing their own performance, but many media articles are plants by rival companies criticizing each other’s products. The description of air defense performance in Syria can be summarized as ‘Rostec pushed Pantsir-S1 into mass procurement, but it fails at this particular mission, and actually Tor is much better but doesn’t have the political influence of Rostec’ and so on.”

Despite similar performance parameters, the Tor and Pantsir usually serve in different roles. The Tor, built by the state-owned firm Almaz-Antey, primarily functions as a forward air-defense asset for Russian ground forces. For this reason, the Tor-M2U—a recent modernization of a system that first deployed in the 1980s—is based on a 37-ton armored, tracked chassis and can acquire targets while on the move … and simultaneously engage up to four aircraft after stopping for three to five seconds to engage its vertical cold-launch system.

Meanwhile, the Pantsir-S1 is based on an unarmored eight-by-eight truck chassis. It primarily operates with the Russian air force in static missions defending bases and weapons installations. This includes protecting S-400 long-range surface-to-air missile batteries from incoming radar-homing missiles such as the United States’ AGM-88 HARM.

The Pantsir boasts a passive electro-optical guidance channel in addition to radar-guidance. Its 12 57E6 missiles have a slightly longer engagement range of 20 kilometers. At $15 million per unit, it’s cheaper than the Tos is.

The Pantsir already had a mixed combat record in Syria. The Syrian military began receiving the first of 40 Pantsirs in 2007, but like the rest of Syrian air defenses, the Pantsirs have had little success in shooting down Israeli warplanes during their frequent raids.

In May 14 2018, a Pantsir reportedly was destroyed by an Israeli Spike missile. Russian media murkily claimed the unfortunate Pantsir was inactive, or had somehow expended all of its missiles.

A Syrian Pantsir apparently shot down a Turkish RF-4 Phantom in 2012.

Russia has deployed its own Pantsirs to protect its aircraft and personnel at Hmeimim air base in Syria, and the Pantsir’s manufacturer has claimed the systems shot down incoming rocket artillery as well as numerous drones operated by the United States, Turkey, and Syrian rebels.

On Jan. 6, 2018 the Pantsirs at Hmeimim engaged a swarm of 13 kamikaze drones deployed by Syrian rebels, shooting down seven. Electronic warfare assets reportedly disabled another six.

In April 2018 Russia reinforced the Pantsirs at Hmeimim with Tor-M2U systems. Murakhovksy’s anonymous source suggests an explanation. Though to be fair, this was not the Tor’s first-ever deployment in Syria.

But are the negative reports reliable? Kofman cautions “I would say industry competition plays a role in this discussion and so while facts may support the overall conclusion, context matters,” he said. “The Pantsir didn’t perform miserably, it simply doesn’t have a radar suitable for tracking small slow-flying targets. It was not built with that mission in mind. What’s the evidence of Tor performing better? Well, the one article that seemed to reflect very positively on Tor and very negatively on Pantsir.”