Does Russia's Defeat in Ukraine Provide an Opening in Syria? 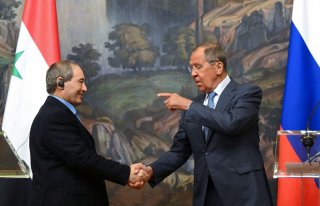 Wars are breaking out across the imperial periphery as Russia is defeated in Ukraine.

This week, Azerbaijan attacked Armenia, striking its sovereign territory—a clear repudiation of the “peacekeeping” efforts masterminded by Russia in the aftermath of the 2020 Nagorno-Karabakh War. As it is attacked, Armenia has plaintively appealed for Russian aid—aid which is not forthcoming.

Border guards of Kyrgyzstan and Tajikistan have also fought, resulting in two deaths.

Across the world where Russia was assumed to be a dominant power, the collapse of that power is evident and destabilizing.

In Georgia, where Russia has occupied 20 percent of the country since the 2008 war, Irakli Kobakhidze, the chairman of the ruling party, Georgian Dream, has even suggested holding a referendum on whether his country wants to go back to war with Russia.

Let’s not misunderstand. Kobakhidze does not want a war. But he does, he said, want clarity on whether the Georgian street supports the position of the government—which is pacific regarding Russia—or the demands from other politicians to recover lost territories by all means necessary.

Russian weakness is so profound that the siren song of recovering lost lands by force has reached the party chairman.

Across the imperial world, weakness is evident. Russia intervened in Kazakhstan in January in order to put down protests against the current government. That government has not only refused to join Russia’s invasion of Ukraine; it has paid several diplomatic discourtesies to the Russian state in the course of the war.

Russia has never been weaker since Vladimir Putin took power in 1999. And into that weakness, bolder nations have stepped.

France, Germany, and the United States have all indicated that Ukrainian successes on the battlefield have convinced them of the need to send more arms, so that the war can be won in good time.

Analysts and academics now say that this is a once-in-a-generation opportunity to end Russian imperialism for good. A strong enough defeat in Ukraine and Russia will not menace its neighbors for decades. It will not commit war crimes in distant lands.

They are right to predict this, and right to advocate for Russia’s defeat in Ukraine. But if policymakers are only looking to Ukraine to weaken Russia’s empire, they are being insufficiently creative.

There are other arenas where Russian weakness presents a previously unimaginable opportunity. The United States must seize this chance.

In Syria, the regime of Bashar al-Assad totters on, sustained by Emirati finance, Iranian militias, and Russian aviation.

It is an abomination that a regime which is the source of so much twenty-first-century evil continues to stand. And Syria’s neighbors will soon know—if they do not know already—the cost of letting this situation persist.

As the regime has degenerated, it has turned to international terrorism and the international drugs trade. It has provided a base for Hezbollah’s missile and drone attacks on Israel, and the location for billions of dollars’ worth of illegal annual production of captagon—a drug that is ravaging the Middle East and the Mediterranean, and which is creating immense work for and violence against border agencies all around.

New photographs were released this week of prisoners in Aleppo who were tortured to death in 2013. They reinforce what we already knew: that the regime has committed and will continue to commit gruesome atrocities in every inch of the country it possesses.

What stable society can ever be built atop those moral ruins?

All of the arguments against attacking Assad have been repudiated by the war in Ukraine and the passage of time. Russia does not lift a finger to save its own soldiers’ lives. It has started no nuclear war. Why would it do anything if a cringing princeling is plucked from its fraying coattails?

Russia’s air defense systems are incapable of defending Russian positions, and are as apt to shoot down Russian aircraft as Ukrainian. Why would Russian air defenses in Syrian regime hands be operated more effectively?

Weekly, Israel carries out increasingly desperate attacks within Syria to degrade Iranian-sponsored and -led militias. And to try to undermine the edifice of international terrorism on which the Assad regime rests.

Meanwhile, the regime and its allies continue to attack remaining enclaves in Syria’s north and to kill civilians. Its mukhabarat intelligence service and ever-ready prisons terrify those Syrians who are refugees. They ensure that while the regime stands, millions will never return.

At the minimum, the United States ought to consider ways to degrade the regime’s air force and its artillery to prevent more destabilizing violence. If this is insufficient, America must wonder how long it must tolerate the savagery of the regime when one of the legs of Assad’s stool has already been kicked out from underneath him.

Sotto voce, some American hawks believe that Azerbaijan should be allowed to defeat Armenia because Armenia is a Russian and Iranian ally. It may be that, but Azerbaijan’s war is hardly a necessary or just one. America should be trying to stop that war, not cheering it on.

Instead, if America wants to make use of Russia’s weakness, and to act only with good sense and justice to defeat its avowed strategic enemies, it will reconsider failed Syria policy of the last decade—and rethink allowing the Assad regime to survive.

James Snell is a Senior Advisor at the New Lines Institute.