How Ukrainian Grit Shocked Russia and the West 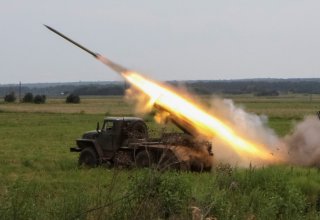 Shortly after Russia invaded Ukraine, numerous Western government officials, pundits, journalists, and analysts published essays stating that the Ukrainian armed forces would quickly fall to the advancing Russian troops. Some even went as far as to argue that Western military assistance would not “make any difference to Ukraine.”

But the current Ukrainian counteroffensives in eastern and southern Ukraine have shown that these takes could not have been further from the truth. Today, Ukraine is still standing, and Russia is retreating. What has changed?

When the Russian incursion began on February 24, the Russians quickly attempted to overrun Ukraine on three different fronts. In the north, the Russians entered Ukraine by way of Belarus, and they moved toward major metropolitan areas such as Chernihiv and Sumy. In the east, Russian forces advanced outside of the Donbas, and they made their way toward Zaporizhzhia. Finally, the Russians launched attacks on Kherson, Melitopol, and Mariupol in the south. Thousands of Ukrainians were killed, and one-fourth of Ukraine’s population was displaced.

Few in the West were willing to give the Ukrainians a chance. While international organizations quickly sent financial, medical, and humanitarian aid, several governments hesitated to provide defense aid to Ukraine.

But as the war progressed, the Ukrainian military and volunteer battalions showed the world they were determined to defend their homeland. The resilience and grit of these Ukrainian men and women changed many Western perspectives, and numerous countries around the world began to send the lethal aid Ukraine needed to defend itself.

By April, the Ukrainians had acquired various weapons from the international community. Using patience and strategery, they launched their first counteroffensive. Within a matter of weeks, the Ukrainians ousted the Russians from northern Ukraine. This operation then allowed the Ukrainians to concentrate on the Russian advancements in the east and south.

Meanwhile, Russian began to see catastrophic losses. As the war progressed, tens of thousands of Russian soldiers were killed, and many more were wounded. The Russians also lost billions of dollars in military equipment, and reports emerged that Russian forces in Ukraine were disjointed. These losses led to a significant decline in Russian morale.

Despite these events, some Western analysts continued questioning how long Ukraine could last. In one take, the authors predicted that the war would result in a stalemate. Others urged Ukrainian forces to compromise with the Russians, believing that a ceasefire would force the Russians to stop the war. Despite these pleas, the Ukrainians continued to fight.

This determination has led to one of the most remarkable turn of events in the war. According to Ukrainian president Volodymyr Zelenskyy, the Ukrainian armed forces have reclaimed over 2,000 kilometers in eastern Ukraine in a matter of days. They have also liberated dozens of Ukrainian villages and towns in eastern and southern Ukraine. In other words, Ukraine’s September offensive has caught the Russians completely by surprise.

The speed at which the offensive has been conducted is remarkable. According to Central European news outlet Visegrad, the Ukrainians have nearly reclaimed all the occupied territories within the Kharkiv oblast (province). The Ukrainians achieved this in a matter of days, while it had originally taken the Russians several months to claim this territory.

But while these events are celebrated, the war is far from over. It will take time before Ukraine fully ousts the Russian invaders. The Ukrainians are high on morale, but they are also tired. They have been fighting for nearly seven months, and they want nothing more than for the war to end.

Ukraine has shown that it has the determination and grit it needs to win. But Western weaponry has also made a big difference

The West has the power to help end the war. As a result, the international community must continue to supply Ukraine with the aid it needs for this operation and the rest of the conflict. Hesitancy in continuing to support Ukraine during this pivotal time will allow the Russians to regroup and re-strategize, and this will only lead to a prolonged war.