More Than Missiles: How Russia Took 80,000 Casualties in Ukraine 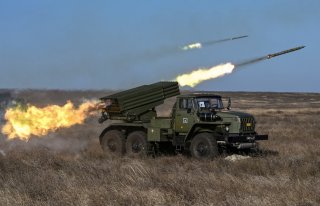 “It’s not the size of the dog in the fight, but the size of the fight in the dog,” former CIA acting director John McGlaughlin told CNN when he was asked about Ukraine’s early successes in repelling Russian invaders. At the time, there were clear, if surprising, reports of Russian failures, tactical missteps, logistical complications, supply problems, and a clear inability to successfully close in on Kyiv. But while many reasons explain Ukraine’s unanticipated successes and ability to capture the world’s imagination, one thing is clear: the invading Russians lacked the “will” to fight.

This makes sense, to some extent; many Russian soldiers were reportedly told they were on a training mission. Yet the Russian morale problems were even larger than some expected. There were numerous anecdotal reports that Russian soldiers lacked food, supplies, and any kind of coherent command and control. Also, just what exactly were the Russian soldiers expected to want to fight for?

The U.S. Department of Defense says that now, months into the war, Russian morale is still a problem. In fact, it may help partially explain why Russian progress in eastern Ukraine has been marginal.

“...Ukrainian morale and will to fight is unquestioned and much higher, I think, than the average morale and will to fight on the Russian side,” U.S. undersecretary of defense for policy Colin Kahl told reporters on Aug 8, according to a Pentagon transcript. “So I think that gives the Ukrainians a significant advantage. After all, more than 40 million Ukrainians are fighting -- the stakes are existential for them. They are fighting for the survival of their country,” Kahl added before citing that Russia has “probably” lost close to 4,000 armored vehicles and “taken 70 or 80,000 casualties in less than six months.”

“Now, that is a combination of killed in action and wounded in action, and that number might be a little lower, a little higher, but I think that’s kind of in the ballpark, which is pretty remarkable considering that the Russians have achieved none of Vladimir Putin’s objectives at the beginning of the war,” Kahl said.

Ukraine’s will to fight and successful employment of decisive use of battlefield tactics have also immeasurably contributed to Russia’s woes. Ukraine has made highly effective use of its anti-armor weapons such as the Javelin and AT-4, decentralized command and control capabilities, and staged highly lethal, surprise hit-and-run attacks on advancing Russian armored vehicles.

“The Russians have probably lost 3- or 4,000 armored vehicles in Ukraine, which is a lot. Now, a lot of that is because of the anti-armor systems like Javelin, like the AT-4s, which are in this package, but also, frankly, because of the creativity and ingenuity in the way the Ukrainians have used those systems, especially early, in the early phase of the conflict when the Russians were stymied in the thrust towards Kyiv,” Kahl said.