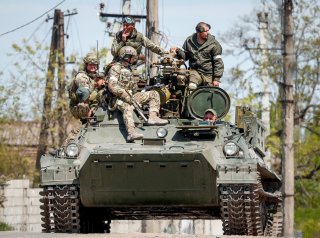 Russian and Russian-aligned forces claimed to have made significant headway in their ongoing campaign to consolidate control over Ukraine’s eastern Donbas region.

Troops belonging to the breakaway Russian-aligned Donetsk People’s Republic (DPR) announced earlier this week that they captured a mine near the strategically positioned town of Avdiivka. “Our unit has completely captured the mine,” said a DPR fighter in a recorded video, according to the Wall Street Journal. The DPR fighter reportedly added that Avdiivka, located less than a mile from the mine, is next in Russia’s advance. The Russian military said it has inflicted significant losses on Ukrainian forces in the Avdiivka area and several other sites in the Donetsk province.

Top Ukrainian officials partially confirmed Russia’s reported gains. President Volodymyr Zelenskyy described the position of Ukrainian forces in eastern Ukraine as “hell,” noting that Russia has the upper hand in the east. “It’s true that we can’t fully break the Russian army’s advantage in artillery and manpower, and that is felt clearly in battles, especially in the Donbas,” he said.

Senior Ukrainian military official Oleskiy Gromov told reporters that Ukrainian troops were forced to retreat from the mine and the Semigorye region in the direction of Bakhmut, a key Ukrainian location sitting on the Sloviansk-Kramatorsk axis. Russian defense minister Sergey Shoigu said this week that Russian and Russian-aligned forces captured a slew of smaller sites in central-eastern Ukraine, including several settlements on the outskirts of Bakhmut. Some of Russia’s claimed territorial advances, as in the case of the village of Berestove, are disputed by Ukrainian reporting.

Sloviansk and Kramatorsk are two of the last major Ukrainian strongholds in the Donbas region. Russian forces mobilized dozens of battalion tactical groups in the direction of Sloviansk after seizing the twin cities of Severodonetsk and Lysychansk earlier this summer. Russia seeks to fully control the Donbas region, which is comprised of the neighboring Donetsk and Luhansk provinces, as part of what the Kremlin calls its “special military operation” in Ukraine.

Gromov said Russia may launch an offensive in the southern Kherson region to regain the momentum there amid reports that Kyiv is gearing up for a major counteroffensive to take the regional capital of Kherson, occupied by Russian forces in the early stages of the war. Ukrainian officials say the invading Russian forces could seek to break through Ukraine’s defensive lines in the south to advance toward the port city of Mykolaiv, which has been subject to relentless Russian strikes in recent months.