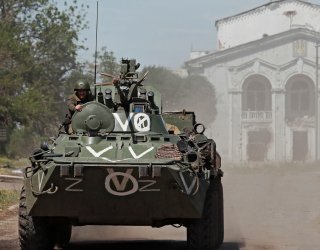 Russian forces have reportedly begun storming the city of Lysychansk, one of Ukraine’s last strongholds in the eastern Luhansk region.

"There’s fierce fighting in Lysychansk. The allied forces have entered the city from five directions and have been tightening the noose on the city center," reported Russian state news outlet TASS, citing a “source close” to the breakaway pro-Russian Luhansk People’s Republic (LPR).

Rodion Miroshnik, the LPR’s ambassador to Russia, said earlier that Russian forces have begun taking up positions in Lysychank’s industrial zone, adding that Russian and Russian-aligned forces control as much as 30 percent of the city. “At the moment, hostilities are taking place in the neighborhood of the Shakhtar Stadium. This is a fairly long stretch of territory that runs along the Siversky Donets River,” Miroshnik told the Russian publication VZGLYAD.

“Our units have already passed part of the industrial zone—and now skirmishes are taking place in the region surrounding the stadium. It can be said that we are making rapid progress,” Miroshnik added. Miroshnik said that Ukrainian troops are trying to flee Lysychansk through the few remaining gaps in Russia's blockade and are making their way to nearby Siversk, a small city just west of the Lysychansk-Severodonetsk salient. Serhiy Haidai, Ukrainian governor of Luhansk region, confirmed on Monday that Russian forces are storming Lysychansk. The situation on the ground remains fluid, with top Ukrainian officials claiming that their forces will continue to resist from inside Lysychansk, though the fighting appears to favor the numerically and qualitatively superior Russian forces as they press their advantage in artillery firepower to slowly degrade Ukrainian positions.

Ukrainian authorities acknowledged last week that the major city of Severodonetsk, just across the river from Lysychansk, has completely fallen under Russian control. "The Russians have fully occupied Severodonetsk, our military has retreated to more prepared positions," Severodonetsk mayor Oleksandr Stryuk said. Ukrainian forces received the order last week to withdraw from Severodonetsk in favor of “new, more fortified positions,” Haidai said, adding that “remaining in positions that have been relentlessly shelled for months just doesn’t make sense.” Russian forces began storming Severodonetsk after advancing on the city from three directions in late May. The retreat of local Ukrainian forces was complicated by partially successful Russian efforts to destroy or capture all three of the major roads leading out of Severodonetsk

The Russian military has recently mobilized as many as twenty battalion tactical groups in the direction of Sloviansk and Kramatorsk, two cities located further to the west of Severodonetsk and Lysychansk, in their attempt to consolidate control over the entire Donbass region.