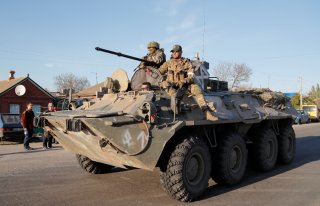 Russian forces continue to slowly capture parts of Severodonetsk, the last major city in the eastern region of Luhansk still under Ukrainian control.

Leonid Pasechnik, the head of the breakaway pro-Russian Luhansk People’s Republic (LPR), told Russian state media on Tuesday that Russian and Russian-aligned forces hold one-third of Severodonetsk. Chechen leader Ramzan Kadyrov claimed that Russian forces are now in control of as many as 70 percent of the city’s residential areas, a figure that is generally corroborated by local Ukrainian authorities.

The LPR’s ambassador to Russia, Rodion Miroshnik, claimed in a Telegram post that the Ukrainian forces still inside the city will try to flee in the coming days. “Ukrainian militants are going to leave Severodonetsk, hiding behind peaceful civilians. People taking shelter in the Azot chemical plant have been ordered to gather their belongings and prepare for evacuation. The [Ukrainian] militants are planning to take hostages on the territory of the chemical plant and to flee Severodonetsk with them, leaving behind reserve forces to cover their retreat,” Miroshnik wrote.

Russian forces began advancing on Severodonetsk, one of the last Ukrainian strongholds in the country’s eastern Donbas region, from three directions earlier this month in an attempt to encircle the large pocket of Ukrainian troops located in the salient between Severodonetsk and the neighboring city of Lysychansk. LPR military spokesman Andrei Marochko announced last week that Russian forces have fully encircled Severodonetsk after successfully denying Ukraine’s armed forces access to all three bridges that could have been used to transport military equipment out of the city.

Luhansk governor Serhiy Gaidai said on Friday that some of the Ukrainian troops in the area may opt to retreat in order to avoid being surrounded. Ukrainian officials say that pro-government forces are still holding out in parts of Lysychansk. It remains unknown whether or not a large-scale retreat has taken place, nor is it clear how many Ukrainian servicemen remain inside Severodonetsk. Gaidai said on Tuesday that a Russian airstrike hit a tank of nitric acid apparently located at the Azot plant, potentially exposing the city’s residents to toxic fumes. Gaidai’s claim has not been verified. Pasechnik previously said the assault on Severodonetsk was not proceeding as quickly as might have been hoped because Russian forces wanted to preserve the city’s infrastructure and sought to exercise caution around its chemical plants, as per Reuters.

Ukraine’s Defense Ministry announced on Monday that Russian forces are planning to resume their offensive in the direction of the nearby city of Sloviansk while moving to consolidate control over the Severodonetsk region.