Russia May Hold a Sham Referendum to Annex Donetsk and Luhansk 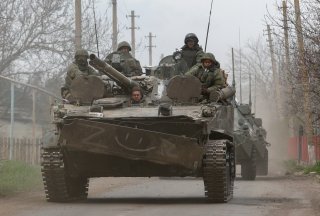 Michael Carpenter, U.S. ambassador to the Organization for Security and Cooperation in Europe (OSCE), warned on Monday that Russia would most likely attempt to annex the self-proclaimed Donetsk and Luhansk People’s Republics, the two pro-Russian separatist territories in eastern Ukraine, in the coming months.

In his remarks, Carpenter added that the Kremlin intended to hold elections in the city of Kherson, a Ukrainian regional capital captured by Russia in the early days of the conflict, for that city and its surrounding areas to become an independent republic. He speculated that the referendum would almost certainly be rigged and pre-emptively added that the United States would not recognize the outcome.

The purpose of the referendum, Carpenter said, would be to “try and add a veneer of democratic or electoral legitimacy” to a process that amounted to the annexation of Ukraine’s territory into Russia, similar to its illegal occupation and annexation of the Crimean Peninsula in 2014. Although that annexation violated the Budapest Memorandum, a multilateral agreement signed in 1994 in which Russia promised to respect Ukraine’s borders, most residents of Crimea have since accepted or approved of the annexation.

Russia’s occupation of Kherson has been far more contentious, as the city’s population immediately held large demonstrations against the occupying forces within days of their arrival. Russia has since kidnapped the city’s former mayor and members of the city council, allegedly cut the city off from telephone and internet access, and replaced the hryvnia, Ukraine’s currency, with the Russian ruble. Carpenter claimed that Russia had sought to impose a pro-Russian school curriculum in Kherson’s schools, although they have not yet reopened.

Russia’s recognition of Donetsk and Luhansk as independent states—a violation of the Minsk Protocol, the Russian-approved framework insisting that the two territories remained within Ukraine and the final objective should be their reintegration into Ukraine—paved the way for its invasion of Ukraine after it deployed “peacekeeping” troops into the two regions on February 21, three days before the launch of its “special military operation” into the remainder of Ukraine.

The Russian law recognizing Donetsk and Luhansk, approved by the country’s State Duma, also included an option that the territories could be annexed into Russia in the future through a referendum. Many of the residents of the two secessionist states are already Russian citizens, partly because Russia has sought to extend Russian citizenship to many of its residents over the past eight years.