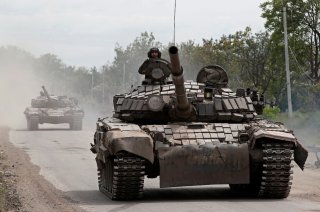 The battle rages on for control of Severodonetsk, one of the last major Ukrainian-held strongholds in the eastern Luhansk region.

Ambassador to Russia from the breakaway pro-Russian Luhansk People's Republic (LPR)— recognized by Moscow as a sovereign state shortly before the invasion of Ukraine—Rodion Miroshnik announced on Tuesday that Russian and Russian-aligned troops now control most of Severodonetsk. “It is locally reported that all residential areas in Severodonetsk have been liberated and cleared of Ukrainian units by allied forces,” he said, according to Russian state news outlet TASS. “They have likewise been almost entirely pushed out of the city’s industrial zones and are holed up in the Azot [chemical plant]. They were also spotted behind Azot, at treatment facilities and at Lesnaya Dacha, where Ukrainian [saboteurs] are active.”

Miroshnik added that there is still active fighting in several of the villages surrounding the city and at the Severodonetsk airport.

Russian and Russian-aligned officials say the brunt of the fighting has shifted to the outskirts of Lysychansk, a neighboring city sitting just across the river from Severodonetsk. “It’s very loud in the Lysychansk area, both exits and entrances,” said Miroshnik. He added that “Lysychyansk will most likely be liberated simultaneously with Seversk,” a nearby town on the path of the Russian military’s advance.

Local pro-government officials say Ukrainian troops continue to hold their positions inside the city, though it is unclear how much of Severodonetsk currently remains under Ukrainian control. "(We) have focused enough forces and resources there to beat back attacks on the city," Severodonetsk Mayor Oleksandr Stryluk said Monday on Ukrainian television, according to Reuters. Ukrainian president Volodymyr Zelenskyy described Severodonetsk and Lysychansk, which have been ravaged by weeks of shelling and urban combat, as “dead cities,” adding that the Ukrainian defenders have “every chance” to push Russian forces back.

Russian troops began storming Severodonetsk in late May, reportedly trapping its defenders inside after capturing or disabling all three bridges leading out of the city. Following several days of heavy fighting, Chechen leader Ramzan Kadyrov reported that Russian troops took as much as 70 percent of the city’s residential areas and were clearing out the last pockets of Ukrainian resistance. The situation on the ground remains fluid, with Ukrainian forces claiming that they have managed to retake parts of the city in recent days.

Ukrainian officials announced last week that the Russian military has mobilized as many as twenty battalion tactical groups (BTG’s) to begin a new offensive in the direction of Sloviansk, a strategically key Ukrainian outpost on the western fringes of the Donbass region.