Will Tensions in Ukraine Boil Over? 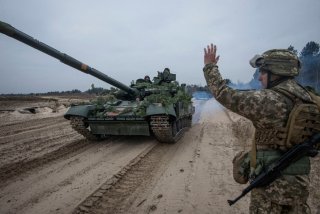 Vladimir Putin’s decision to recognize the independence of the Donetsk (DPR) and Luhansk People’s Republics (LPR) on February 21, followed by the introduction of Russian “peacekeepers” into the territory of the two republics, are big developments. They signal the abandonment of Russia’s commitment to the Minsk Process, maintained in theory for the last seven years. Recognition also provides the legal ground for a Russian intervention on behalf of the statelets. Russian troops are moving into the territory, which they had not done since the early phases of the conflict.

Negotiations to implement the agreements reached at Minsk in February 2015 have long been seen by responsible observers as the only viable way of resolving the conflict. Minsk II had the merit of splitting the difference between the parties, giving Ukraine sovereignty and the Donbas autonomy. Though the formula pleased diplomats in Germany and France and was acceptable to Russia, it was from the outset utterly remote from the facts on the ground. The Ukrainians received Minsk II as a diktat. They have been dead set against offering autonomy to the Donbas; conventional thinking in Kyiv is that no government could survive such an offer. By the same token, the inhabitants of the DPR and LPR never wanted the Minsk formula either and would have had no trust in any assurances Kyiv might have offered. That Kyiv didn’t offer any, together with getting shelled for seven years, confirmed to these people that reintegration into Ukraine would be extremely prejudicial to their interests.

Each opposing side could only have been brought to accept the Minsk formula through the dictatorial sway of their respective patrons. Mainly because the Ukrainians never took the first step and received no U.S. advice to alter their position, it has remained a dead letter. Russia’s recognition of the DPR and LPR delivers the formal death certificate, but the corpse, now seven years old, never once showed signs of real life. Its only existence was in thoughtful speeches by thoughtful statesmen, like former German Foreign Minister Frank-Walter Steinmeier. The two nations most committed to Minsk, Germany and France, have little leverage with either of the parties or their patrons. France under President Macron, though unfortunately powerless in the crisis, at least gives evidence of direction and will; Germany, by contrast, seems to drift in the ether, unformed, like disconnected particles yet to become a star.

Russian recognition of the two statelets has the primary implication and purpose of reinforcing Russia’s determination to fight in the event of a Ukrainian attempt to recapture that part of the Donbas occupied by the two statelets. Any such attempt appeared to have been put on extended hiatus in the aftermath of the firm declaration of the U.S. government in December that no U.S. forces would be sent to Ukraine in the event of a Russian Ukrainian War. The logic underlying this conclusion was simple: Ukraine has military superiority over the DPR and LPR. Russia has military superiority over Ukraine. The Ukrainian forces in the Donbas are estimated to be anywhere from 100,000 to 125,000, whereas the size of the military formations in the LPR and DPR are less than 50,000. If Ukraine faced the forces of the statelets by themselves they would easily prevail; if they encountered direct Russian intervention, they would not prevail. They are wholly unprepared and ill-equipped for that task.

Events of the last few days suggest that the absence of a direct U.S. military backup has not stayed the hand of the Ukrainian military. They have engaged in a big escalation. This is denied by the Ukrainian authorities and by the U.S. State Department, but the maps published by the Organization for Security and Cooperation in Europe (OSCE) monitors, detailing explosions in the Donetsk and Luhansk regions on February 18 and February 19-20, clearly suggest the contrary. Those big red splotches on the map around Donetsk and Luhansk show an intense bombardment. Overall, there were over 1400 shell and mortar detonations on February 18, about 2,000 explosions over the next two days. From the two maps, it looks like about two-thirds to three-fourths were on the Russian side of the line. This level of activity marks a big change. In early February, the previous thirty-day average was around sixty explosions per day. 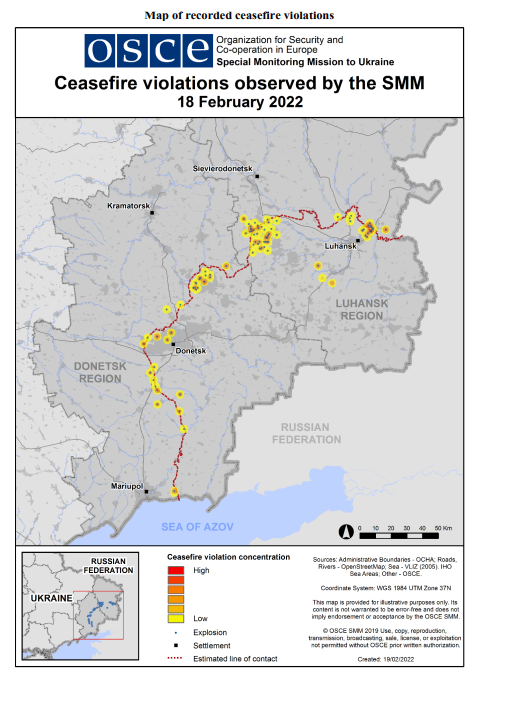 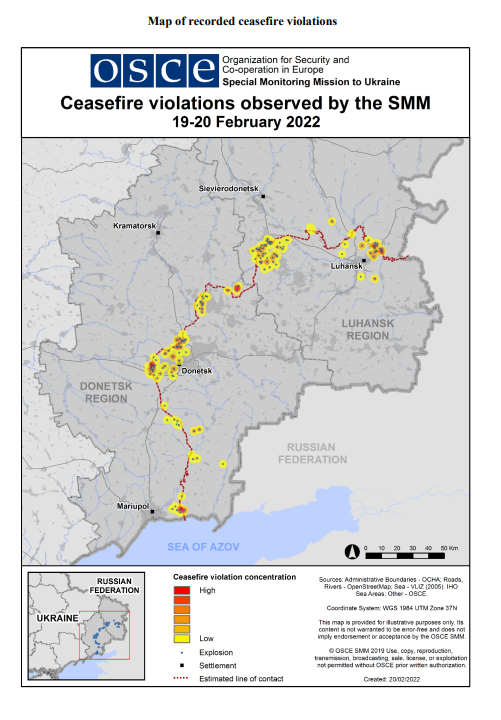 Secretary of State Antony Blinken on Sunday referred to “provocations created by the Russian or separatist forces over the weekend, false flag operations.” These artillery strikes on the territory controlled by the two statelets must be what he is referring to. One infers from official U.S. sources that all the ordnance is being expended on the Russian side—some to attack the Ukrainians, the larger share reserved for an attack upon themselves. For the military non-experts, the administration could perhaps explain how one positions artillery and mortars to do this sort of thing—that is, fire on your own positions—and why this would escape the notice of OSCE observers and cameras. The administration might even go so far as to provide real evidence from their sophisticated reconnaissance capabilities as to what is going on. It is, of course, virtually guaranteed that it won’t.

Administration officials and the corporate media have thus got their story straight on this nefarious Russian plot—those thousands of false flags fluttering amidst exploding ordnance on the outskirts of Donetsk and Luhansk—but none of the media reports bother to mention the OSCE data. You would not know that this observer mission exists if you were just reading the FT, the Washington Post, the New York Times, and the Wall Street Journal over the last week. And these are serious outlets which do not, like the cable networks, generally make it their business plan to subtract from the sum total of human knowledge.

The Ukrainian bombardments, intended to harass rather than to kill, are putting pressure on the inhabitants of Donetsk and Luhansk to leave. How large that evacuation will be remains unclear at this stage—the 700,000 figure announced by the leader of the DPR is not necessarily to be taken at face value—but the strike on the Donetsk water system, affecting some one million inhabitants according to International Red Cross observers, cannot provide much motivation to stick around. Russian reinforcements, however, may do so.

Who exactly controls the levers of power in Kyiv is not clear. Does Ukrainian President Volodymyr Zelensky have 100 percent control over the military establishment, such that he can dictate military responses and operational plans along the line of contact? We do not know the answer to this question, though the suspicion arises that he is dealing with some very tough characters who brook no nonsense from the president. Nor do we know whether Ukraine is responding to U.S. coaching or defying it in its approach to the Donbas.

Why would Ukraine dramatically escalate its shelling with no American military backstop? There would seem to be two possible answers. It might have calculated that Russia would decide not to intervene, given the diplomatic and economic costs such an intervention would entail, even if limited to the Donbas. On this theory, it believed that these actions would put it on the course to victory. Whatever credence was given that theory by Ukrainian authorities, it seems now essentially foreclosed by Russia’s actions on February 21. Given all the previous signs that Russia would not permit Ukraine to replicate Azerbaijan’s victory over Armenia in 2020, it seems unlikely that the Ukrainians counted on Russian forbearance and passivity.

The much more probable Ukrainian calculation is that even a tactical defeat will lead over time to a strategic victory. That is, it would heighten the West’s desire to speed up Ukraine’s rearmament, because the more severe the Russian punishment, the angrier Western (and world) opinion would get. The dead Ukrainian soldiers would become martyrs to the cause, whose memory would be defiled if Ukraine broke from that cause. Short-term pain, long-term gain.

Whatever the motive, the Ukrainian escalations of the last week, together with Russia’s recognition of the DPR and LPR and its movement of forces into their territories, advance the conflict to a new level. The military conflict to be expected is the one arising from the control of the territory of the insurgent republics. This, not the fantastic scenarios of the conquest of Ukraine conjured by “U.S. intelligence,” is the pivot of the whole controversy. If further escalation comes, it would probably consist of a Russian aerial blitz against Ukrainian artillery close to the line of contact; even a larger operation is far more likely to resemble Russia’s actions in 2008 against Georgia than the Soviet invasion of Afghanistan in late 1979.

Russia faces with almost every alternative the bleak prospect of far-reaching sanctions, with the United States and Europe proposing in effect the consolidation of a new Iron Curtain or cordon sanitaire. It is as if our purpose all along was to strip from Russia all its incentives for restraint. Putin’s anger is conditioned by reason of state, to which he ordinarily bows, but he is angry.