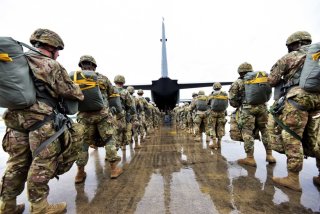 What did we just witness? I refer to the two-month frenzy that seized the Western media, in which Vladimir Putin was massing 175,000 troops on Ukraine’s border for an invasion to begin right about now. The Washington Post led on December 3, 2021, with those big numbers and was duly followed by others.  A gigantic massing of forces was taking place. Putin was threatening an invasion and had mobilized his forces to accomplish the final breakage of Ukraine. President Joe Biden was a believer, ordering evacuations from embassies in Ukraine and Belarus. He told Ukrainian president Volodymyr Zelenskyy in late January that blood would almost certainly flow in the streets of Kiev, the national capital; “prepare for impact” sometime soon, probably in February.

And then a surprising thing happened. The Ukrainian president, the guy whose lead we were apparently following, said, in effect, cut it out. Not true. You’re panicking people in Ukraine, hurting its economy, and besides the Russian troop movements were really nothing out of the ordinary.

The Ukraine Narrative wobbled with that development. The people of Ukraine, who were soon to be flattened, were nonchalant while the distant superpower was on the edge of a nervous breakdown. Everyone involved among U.S. and Ukrainian officials then denied that the great rupture had happened, though of course, it did happen. It tells us something very revealing about the prospects for war.

Biden made it clear in December that no U.S. forces were going to be deployed to Ukraine in the event of a Russian invasion, ruling out U.S. participation in a war but touting the threat of devastating economic sanctions as a deterrent. Biden also distinguished between a minor and a major Russian incursion, in what was widely held by the commentariat to be a gaffe. Zelensky complained about this, tweeting, “We want to remind the great powers that there are no minor incursions and small nations. Just as there are no minor casualties and little grief from the loss of loved ones. I say this as the President of a great power.” After telling Biden to chill on the invasion-mongering, he taunted the administration at a press conference: “Tell us openly we will never get into NATO.” Zelensky had heard loud and clear the Washington message, as recalibrated by Biden in December: Accept an offer from Moscow? Politically impossible, morally reprehensible. Prepare to fight them? Are you mad?

It is as if American Maximalism, the neocon policy canonized by Stephen Sestanovich, had finally met its match in the “no more war” sentiment among the American people. These two imperatives, pointing toward a posture of total hostility that is also emphatically short of war, doubtless float in the president’s brain as basic parameters of policy. But Biden’s stance—super-aggressive but also super-cautious—did not sit well with the Ukrainians.

This contretemps between the leader of the Free World and the president of the Ukrainian “great power” was very disturbing to the Washington establishment. They thought that Zelensky had flubbed his performance. He was apparently unaware of his proper role. “We’re his most important ally and he’s poking us in the eye and creating daylight between Washington and Kyiv,” said a senior administration official. “It’s self-sabotage more than anything else.”

Why War is Off the Table, for Now

The most striking implication of Zelensky’s comments is that the war scare was made in the United States. To understand why Zelensky doesn’t think a war is imminent, we must go back to April when the first great scare of a Russian invasion occurred. The preceding year, Azerbaijan had demonstrated in its conflict with Armenia that Turkish and Israeli drones could smash entrenched positions and rout the defenders. The Atlantic Council, the eyrie of Washington’s Ukraine hawks, immediately noted the relevance of this demonstrated new capability to the frozen conflict in the Donbas.

The new team at the White House, closely following a script announced by the Atlantic Council, declared that Crimea and the Donbas must be put back on the table. That meant, explained a Biden official, a “very extensive and almost constant focus on Ukraine from day one.” In the view of Democrats, Donald Trump had been a shameless appeaser of Putin; indeed, he was Putin’s puppet. This narrative, to be sure, was dubious in the extreme, as Trump the ostensible appeaser surrounded himself with advisors—H.R. McMaster, Mike Pompeo, Nikki Haley, James Mattis, and John Bolton—who regularly blasted Russia in scalding tones. But though the narrative may have been wrong, it was theirs. The Democrats believed it. Where Biden and Secretary of State Antony Blinken largely followed Trump’s line on China, they broke sharply with him over Ukraine.

The Ukrainian government hailed the new administration and set forth a platform for the return of Donbas and Crimea. Then on April 3, 2021, Ukraine’s military announced on Facebook that military exercises would be conducted with five NATO powers in Ukraine’s eastern regions later in the year. “In particular,” it said, “defensive actions will be worked out, followed by an offensive in order to restore the state border and territorial integrity of a state that has been subjected to aggression by one of the hostile neighboring countries.”

Russia’s callup of reserves—which both now and in April was interpreted by U.S. intelligence as reflecting plans for a gigantic invasion—was in direct response to these three important developments: a startling new demonstration of the effectiveness of drone-led offensive operations, a new U.S. posture toward Ukraine-related issues that was far more aggressive than Trump’s, and the declaration by Ukraine’s military that they were working on a plan to drive the Russians out of the occupied territories. When Biden said in December that the United States would not commit forces to Ukraine in the event of a war, it took the legs out from under this plan.

The United States now vehemently denies that there was any idea of retaking the Donbas by force and that this is an invention of Russian propagandists. From the outside, it is impossible to know how far these plans advanced and how seriously they were taken, but to say that the Russians had no basis for thinking that something was afoot is clearly absurd. What is the explanation for the April 3 Facebook post by Ukraine’s military? Were they the unfortunate victims, like Joy Reid, of a malicious hack? If the Azerbaijani war had no military significance for the Donbas, why did the Atlantic Council argue that it did?

It is obvious that Ukraine’s military has sought an Azerbaijani-like capability in the past year, and little doubt that the United States has facilitated the acquisition of one. But it is equally obvious that no such plan can be put in motion if the U.S. attitude is what Biden and Blinken said it was in December. The Ukrainians were optimistic about getting such a pledge from the Americans during the previous year—that is, getting an American backstop if they sought to regain their lost territories by force, replaying the Georgia option of 2008 but this time with American guarantees. Their hopes are now deflated. Hence Zelensky’s taunt: just tell straight out that that we cannot join NATO, that is, that you intend to leave us in the lurch with regard to our lost territories.

The View from Russia

The air is thick with wild interpretations of Russian motives. As portrayed in the Western press, it is Putin and the Russians who are thirsting to change the status quo. He wants to conquer and absorb Ukraine. He wants to restore the Soviet Union. He wants to bring Russia to the geopolitical position the Soviet Union had in 1945. He wants to evict the United States from Europe. Since our Russia experts proceed on the assumption that you cannot believe a word he says, they are freed from all evidentiary restraint in their explication of what Putin wants. Since they rule out by hypothesis that he could conceivably have defensive motives, we are left with the choice of aims ranging from the aggressively obnoxious to the insanely aggressive.

The hawks are not ashamed to make stuff up. Putin, they say, is daily threatening war to take over Ukraine. No, that is what the United States and its media sycophants are saying that Putin is saying and doing. He says the military deployments are nothing. The Russian Foreign Ministry reminds people just about every day that it is not threatening any such war.

On Putin’s putative desire to conquer and absorb Ukraine, consider that Ukraine, a nation of 43.3 million people, would be impossible to rule effectively and profitably from Moscow, while the attempt to do so would emphatically impose huge financial and political costs. One of the pristine memories of Soviet history is that when Josef Stalin ordered his mercilessly cruel and wholly irrational campaign of dekulakization and collectivized agriculture, the Ukrainian peasantry burned half its grain and killed half its livestock rather than surrender it to the commissars.