Why Zelenskyy Is Downplaying a Russian Invasion 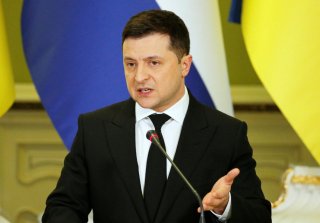 At the Cuban restaurant Escobar in Kyiv, Ukraine, patrons are encouraged to unleash their inner artist. Grab an awaiting Sharpie pen and you can help cover the hallway in signs, slogans, and declarations of love. Some are overtly political. “New Jersey stands with Ukraine,” Representative Gregory Meeks, chairman of the House Foreign Affairs Committee, scrawled on the wall.

A festive atmosphere also prevails in a separate speakeasy in the basement, where I was headed with my chums to savor a cocktail. To gain entrance, we pounded on the door and uttered a codeword to the waitress. Et voila! It was as though a new world was before us. VVP? Invasion? Couldn’t be further away from anyone’s thoughts. Foreign correspondents and Ukrainian business owners are bewildered by the West’s insistence that Vladimir Putin will take another bite out of Ukraine. The attitude comprises its own heady cocktail of fatalism mixed with a dash of sang-froid.

Conflict is hardly new to Ukraine. Quite the contrary. Like not a few of his historic predecessors, Putin relishes dishing it out to the Ukrainians, in his case for eight years—more than 14,000 people have been killed. By now, Ukrainians are inured to Putin’s tactics and threats. “If he strikes again, we will figure it out,” a leading businessman tells me. “Even if we lay aside water for two weeks now, what good will it do?” That sentiment pretty much captures the mood in Kyiv.

There are no food shortages. No one seems to be panicking. But there is a steady undercurrent of unease. I lived in Kyiv from 2007-2008 and have regularly visited it since then. On a visit this past week as part of a delegation of former American military and diplomatic officials to Kyiv, I discovered that most restaurants are full, but there is virtually no traffic on the capital’s usually congested streets. Adding to the uncertainty is a wave of phony bomb threats that Ukrainians ascribe to Russia: “This is an element of the hybrid war. To create chaos, uncertainty about tomorrow, and a constant state of stress. So that schools have to switch to distance learning, and businesses close,” Zhytomyr Mayor Serhiy Sukhomlyn has said.

As more than 130,000 Russian troops coupled with some pretty potent military equipment surround Ukraine, Putin and his camarilla have issued statement after statement to try and up the ante. It started with Ukraine. Then it was that no new aspirant can join NATO. The result is that Finland and Sweden, two holdouts, are considering joining the alliance.

Diplomacy is on life support. Moscow and Washington are still talking, but about nothing significant. Moscow wants a veto over NATO membership and Washington’s foreign policy. It also wants to ban strategic and ballistic missiles and less sophisticated equipment as well as throughout the territory of the former Soviet Union and the Warsaw Pact. Washington has politely told Moscow to drop dead while keeping Europe united if Moscow strikes again while sending planeload after planeload of military equipment to Kyiv.

Will it be enough to deter the Kremlin?

Europe is stepping up its game, and London and Paris recently made headlines by announcing that they will send more equipment (London) and send troops (Paris) to Romania. Awash with rumors, Kyiv can be a rather bewildering place.  One of the presidential administration’s favorite sources of information—Telegram—brims with conspiracy theories. A favorite one is that Washington is hyping the threat of an imminent invasion to force Kyiv to accept a painful compromise with Moscow.

Nothing could be further from the truth. The Biden administration cannot afford another foreign policy debacle only months before the midterm elections. Washington and the Biden administration fear being caught off guard again, as in 2014 when Moscow easily annexed Crimea. As it happens, Volodymyr Zelenskyy too has his eye on the election cycle. When he ran for office in 2019, he pledged to stay in office for one term. That was then. Now the former comedian has acquired a taste for power and hankers for a second term, which is why virtually every decision he has made should be interpreted through a domestic lens.

Zelenskyy wants to downplay the Russian threat because it’s hurting the economy and his chances at a second term. Zelenskyy and his team do not disagree with the U.S. intelligence assessments that Washington has shared with them. He disagrees with the interpretation—and how it plays into his future plans.

The thing that would really put a spring in Zelenskyy’s step is if spring itself arrives sooner than later. The frozen season—most of February—when Russian tanks can easily roll into Kyiv, will have ended and the mud season started. If that occurs, Zelenskyy would be sitting pretty. He could depict himself as a far-sighted statesman who refused to chicken out in Kyiv, cautioning calm while lesser mortals in Washington fell for Putin’s bluff.