Putin Is Paying For Ignoring These Principles of War 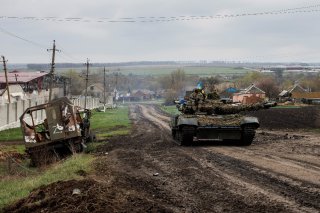 With the Russian war on Ukraine already three months old, it is clear that Moscow’s initial plan has foundered and failed to achieve its original strategic aims. The failure to seize Kiev and force a Ukrainian concession, coupled with high casualties (to include an astounding number of general officers to date) and heavy material losses, has surprised most Western experts. The explanations for these failures are numerous—poor, overly-optimistic assumptions, inadequate logistics planning, Western support to Ukraine, and the performance and spirit of Ukrainian armed forces and volunteers themselves, to state the most obvious. In addition to the myriad of operational explanations for Russia’s failure, Putin’s fiasco thus far can be attributed at least in part to behavior that violates what one twentieth-century  military leader held to be principles of war.

While he doesn’t have the name recognition of George Patton or John J. Pershing within the pantheon of American military leaders, Maj. Gen. Fox Conner  had an outsized impact on the profession of arms in the twentieth century. This lesser-known general played an important role as a staff officer in World War I, serving in key positions with the American Expeditionary Force (AEF) headquarters during the critical final offensives of the war. His most lasting impact, however, was a result of his mentorship to key leaders such as Patton, George Marshall, and a rising star named Dwight Eisenhower.

When he was assigned to command a brigade in the Panama Canal Zone during the interwar period, Connor requested then-Major Eisenhower be appointed to his staff—an assignment which proved to be a formative experience for the younger officer. Between planning training and running the organization, the mentor and protégé regularly discussed tactics and leadership, and Conner ignited an interest in history that had generally been dormant in Eisenhower up to that point. Eisenhower would later say that meeting Conner in 1920 was the pivotal event in determining the eventual arc of his career. One of the most impactful lessons imparted on the future supreme allied commander and president was the one regarding Conner’s three principles of war: Never fight unless necessary; never fight alone; and Never fight for long.

In Ukraine, Putin is learning the hard way that Connor’s principles, while meant to apply to democracies, are as close to universal rules for waring states as one can find.

Putin has embroiled Russia in a war of choice in which he is unquestionably the aggressor, despite disinformation efforts that aim to convince Russian citizens and the world otherwise. With the banal term “special military operation” being used as a euphemism for the flagrant violation of Ukrainian sovereignty, Russia invaded a neighbor that posed no real strategic threat. The war is one of choice, and Putin’s unprovoked attack has ironically galvanized the trans-Atlantic alliance in a way that few things could. Knowing that wars can take on a life of their own, civilized people have long looked at war as a situation of last resort. Not so for Putin, who by now must be realizing that, as Winston Churchill wrote, once the signal for war is given, “the statesman is no longer the master of policy, but the slave of unforeseeable and uncontrollable events.”

Russia chose to invade Ukraine, and it chose to do so essentially unilaterally. Belarusian leader Alexander Lukashenko has been the closest thing to an ally that Putin has, but in reality, he is little more than a “vassal and accomplice.” All labels aside, Belarusian complicity did provide Putin with a free hand to stage forces and deploy them into Ukraine from advantageous positions—closer to Kiev than would have been otherwise possible. Since the start of the invasion, however, Lukashenko has provided little at this point beyond safe haven and rhetorical supporting fires.

Even China, on the heels of a summit in which Chinese-Russian relations were declared to have “no limits,” has vacillated, and Xi Jinping seems unsure of how much support to offer his autocratic kindred spirit. China remains guarded, continuing to balance between denouncing the United States while not overtly backing Moscow, all while the West implores China to not circumvent sanctions levied on Russia or Russian entities.

The Western response has been overwhelming pro-Ukrainian, from the steady supply of defense material to the renaming of streets that are home to Russian embassies. Regardless of what final military end-state unfolds for Russia, the leaders of the Kremlin will likely find themselves ostracized and internationally isolated to a degree not seen in decades.

While the first two of Conner’s axioms are generally within Putin’s purview as a decisionmaker, the last of Fox Conner’s rules, "never fight for long,” is proving to be beyond Putin’s control. As Carl Von Clausewitz, the famed theorist and author of the seminal book On War, wrote, war is not dictated to an inanimate object, but is a “collision of two living things.” In short, the enemy gets a vote regarding the tempo and duration of the war. Moscow (and indeed much of the West) expected Kiev to fall within three days and planned and resourced the invasion accordingly. Instead, Ukrainian forces have exceeded expectations and offered stiffer resistance than Moscow anticipated. Tempted by the mirage of a short, decisive operation, Russia must now continue to navigate the conflict while also adapting to a salvo of sanctions that will also not get better with time. Putin’s “special military operation” may have been envisioned with limited aims for Putin, but it is an existential struggle for Ukraine and Ukrainian president Volodymyr Zelensky. You don’t get to tell your adversary to fight a war that is time-bound, or limited in scope.

As of this writing, the fate of Ukraine—particularly the territory in the east, including the Donbas and the Black Sea coast—remains unknown but strongly contested. Ukrainians, like the Finns in 1940, have shown the world “what free men can do,” with their success built on a foundation of Russian ineptitude, poor assumptions, and behavior that repudiates historical lessons. Putin chooses to ignore norms and the rules that buttress the international order, and his decisions have been the opposite of the common-sense rules laid out by Fox Conner. Conner taught his mentees a simple set of principles: never fight for long, never fight alone, and never fight if you don’t have to. Putin has ignored this twentieth-century maxim to his detriment, and as the world is seeing with a degree of schadenfreude in Ukraine, these principles are indeed timeless, and leaders ignore Conner’s lessons at their own peril.

Rick Chersicla is an Army Strategist currently serving as a joint special operations planner. The views expressed in this article are his and do not reflect those of the United States Army, the Department of Defense, or the United States Government.