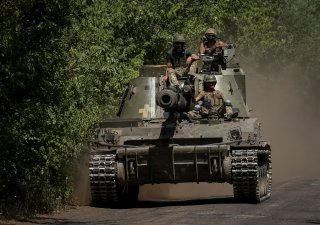 Russia is forming plans to annex more parts of Ukraine, according to the White House.

“We have information today, including from downgraded intelligence that we’re able to share with you, about how Russia is laying the groundwork to annex Ukrainian territory that it controls, in direct violation of Ukraine’s sovereignty,” John Kirby, the communications director at the National Security Council, said in a press briefing on Tuesday.

“We’re seeing ample evidence in the intelligence and in the public domain that Russia intends to try to annex additional Ukrainian territory. Russia is beginning to roll out a version of what you could call an ‘annexation playbook,’ very similar to the one we saw in 2014,” Kirby added, referring to Russia’s annexation of Crimea in February 2014.

Kirby said the invading Russian forces are installing local proxy officials in parts of occupied southern and eastern Ukraine. “First, these proxy officials will arrange sham referenda on joining Russia. Then, Russia will use those sham referenda as a basis to try to claim annexation of sovereign Ukrainian territory,” he claimed. Though the Kremlin has not taken a public stance on the official status of territories captured by Russian forces, there has been a growing expert consensus that Moscow is not considering relinquishing any of the territories it currently controls back to the Ukrainian government.

Reports emerged in May that pro-Russian occupation officials in Kherson are pursuing efforts to become part of Russia proper. "The Kherson region intends to accede to the Russian Federation in the near future, becoming its full-fledged constituent," said Kirill Stremousov, deputy head of the Kherson regional administration.

Kirby’s announcement suggests that Moscow could eventually opt to annex the Russian-aligned breakaway Donetsk and Luhansk People’s Republics (DPR and LPR), which were recognized by the Russian government as sovereign states on February 21, rather than retaining them as quasi-independent proxies. LPR leader Leonid Pasechnik announced in March that the Luhansk separatists will hold a referendum “in the near future” to join the Russian Federation. “The Kremlin has not disclosed the timeline for the referenda, but Russian proxies in these territories claim they will take place later this year, possibly in conjunction with Russia’s September regional elections,” Kirby said.

Kirby reiterated that the United States will not recognize any referenda held by Russia in Ukraine, adding that the White House will respond to Russia’s purported annexation plans with further sanctions. “Any sham efforts to legitimize an illegal land grab will only make things worse for Russia. And we’re going to help make sure of that,” he said.