Will the Russian War in Ukraine End in a ‘Korean Scenario’? 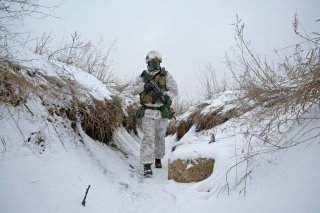 According to a top military official, Russian president Vladimir Putin is planning a “Korean scenario” for Ukraine.

Gen. Kyrylo Budanov, the head of Ukraine’s military intelligence, warned on Sunday that the Kremlin is seeking to partition his country like the Korean Peninsula was in the mid 20th century.

"There are reasons to believe that [Vladimir Putin] may try to impose a separation line between the occupied and unoccupied regions of our country. In fact, it will be an attempt to set up South and North Koreas in Ukraine," he said.

Korea was divided along the 38th parallel in the aftermath of the Second World War. The two Koreas are still technically at war after a 1950-1953 conflict reaffirmed the peninsula’s division along the Military Demarcation Line.

“The occupiers will try to unite the occupied territories into a single quasi-state entity, which will oppose independent Ukraine,” Budanov added. “We are already seeing attempts to create ‘parallel’ authorities in the occupied territories and force people to give up the Ukrainian currency.” The invading Russian forces are now reportedly working to secure a land corridor between Donbas and Crimea; the besieged southeastern port of Mariupol is the last major obstacle left standing in the way of that effort. In Budanov’s assessment, after failing to quickly occupy Kyiv in the opening stages of the war, the Kremlin has shifted its strategy in Ukraine.

Budanov’s statement came shortly after Leonid Pasechnik, leader of the pro-Russian separatist Luhansk People’s Republic, announced a future referendum on unification with Russia. “I think that in the near future a referendum will be held on the territory of the republic, during which the people will … express their opinion on joining the Russian Federation,” Pasechnik said. Ukrainian officials warned earlier in March that Moscow could be planning the creation of another breakaway “people’s republic” in the occupied Kherson region of southern Ukraine.

Col. Gen. Sergei Rudskoy, deputy chief of staff of Russia’s armed forces, announced on Friday that the “first stage” of Russia’s invasion of Ukraine has been completed, adding that the Russian military will now focus on the “complete liberation” of the eastern Donbas region. Moscow’s long-term objectives in Ukraine, and its timetable for accomplishing them, remain unclear.

The latest round of Russia-Ukraine peace talks, which have so far failed to yield any substantive results, will be held in Istanbul, Turkey, on Monday. Ukrainian president Volodymyr Zelenskyy signaled in an interview on Sunday that he is open to a potential compromise involving Ukrainian neutrality. However, Zelenskyy added that any such agreement would have to be guaranteed by third parties and put to a referendum.