Russia’s War on Ukraine Is Far From Over 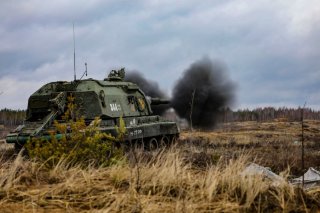 The Russian military issued an update on the status of its war effort one month into the invasion of Ukraine.

“The main tasks of the first stage of the operation have been completed,” said Sergei Rudskoi, chief of the Main Operational Directorate of the General Staff of Russia’s armed forces. “The combat potential of Ukraine’s armed forces has been significantly reduced, which allows (us) -- I emphasize once again -- to focus our main efforts on achieving the main goal -- the liberation of Donbas.”

Several outlets seized on the announcement as a potential sign that Russia is scaling back its military campaign in the face of stiffer-than-expected Ukrainian resistance. But there is no evidence that Moscow has abandoned the maximalist aims originally outlined by Russian president Vladimir Putin on February 24. On the contrary, Rudskoi reiterated on Friday that Russia remains committed to the total “denazification” and “demilitarization” of Ukraine. When viewed in the context of recent statements made by top Kremlin officials, the announcement suggests not that the Russian military is scaling back its objectives, but that it is retrenching in anticipation of a drawn-out conflict; that is, Moscow may have decided that it needs to consolidate its control over the Donbass before resuming ground offensives in the Kiev region and pushing further west.

Russian forces have reportedly made major ground over the past several days in their advance into the southeastern port hub of Mariupol. Chechen leader Ramzan Kadyrov, whose forces are actively participating in Russia’s southern theater, announced on Thursday that Chechen troops had taken control of the city hall and are sweeping the city to flush out remnants of the Azov Battalion, the Ukrainian military unit in charge of defending the city. Also on Thursday, the Russian Defense Ministry published a video purporting to show Russian troops handing out humanitarian aid to locals in one of the city’s major squares. There are some unverified reports that local Ukrainian forces have retreated inward and are mounting a last stand in the city’s southernmost district, but the fall of Mariupol appears as a near certainty after the Russian ground advances of the past several days. The city’s seizure would put the invading forces in control of around 80 percent of Ukraine’s Black Sea coastline, setting the stage for a Russian advance in the direction of one of the campaign’s biggest prizes: the strategic port metropolis of Odessa. It would also eliminate one of the last vectors of Ukrainian resistance in the southeast, providing the Russians with a land corridor from Donbass to Crimea and posing a major milestone in Moscow’s efforts to consolidate control over territories east of the Dnieper River.

Kharkiv, Ukraine’s second-largest city, is encircled and faces a rising cadence of shelling and airstrikes. There is no indication that local authorities are so much as entertaining the prospect of surrender, raising fears that the invading forces will subject the city to increasingly destructive rocket bombings to soften it in anticipation of what could be a costly ground offensive. Further west, Russian troops have reportedly been bogged down in the Kiev region. Ukraine’s Defense Ministry claimed this week that its forces have driven the Russians out of the Kiev suburbs of Makariv, preventing Russia from encircling the capital city from the northwest. Though these specific battlefield claims have not been verified—and, if true, could possibly be reversed by the Russians in the coming days—there is widespread consensus among Western military experts and intelligence sources that the Russian military has been stalled near Kiev. The Russian military has confirmed a death toll of 1,351 soldiers, but NATO officials say that number is anywhere between 7,000 and 15,000. Though neither Kiev nor the Western officials have publicly assessed Ukrainian losses, the brutality of Russia’s continued bombardments and the fighting on the ground suggests those figures are no less considerable. Russia’s Defense Ministry claimed on Friday that Ukraine’s armed forces have suffered 14,000 fatalities over the course of the conflict.

One month into the war, there is little question that the Russian military has underperformed by any reasonable battlefield measure. But to conclude from this that Ukraine is winning, or that Russia has already lost, is far too premature. Conflict mapping shows that the line of control (LoC) in Ukraine has steadily shifted in Russia’s favor since February 24, with the invading forces making slow-but-steady gains in the war’s southern and eastern theaters. As observed by Graham Allison and Amos Yadlin for The National Interest, Russia now controls twice as much Ukrainian territory as it did when the war began.

Higher-than-expected losses will impede Russian ground operations in the short term, but they will not prompt the Kremlin to reverse course in Ukraine. Russian strategic culture and political discourse have historically shown a high casualty tolerance, particularly in conflicts that enjoy substantial mass support. Putin has successfully mobilized the Russian population around the war in Ukraine; recent polling shows that popular support for the conflict has actually risen, not fallen, since February 24, and now hovers at around 70-74 percent. To the extent that Putin is facing any meaningful pressure at home, it is not to end the war but to prosecute it more vigorously.

Ukraine’s armed forces have held out far longer than both Russian and Western observers predicted, but the underlying strategic reality has not changed: Moscow, convinced its existential interests are at stake, has the resources and the political will to see this war through to the bitter end.

Where does this leave the West? Continued arms shipments to Ukraine will prolong the conflict, even if at a steep cost to Ukraine’s devastated population, but they cannot change its outcome; the Kremlin will commit as many forces as it needs, for as long as it needs, until it eventually succeeds in imposing its desired military solution in Ukraine. There is nothing the West can do to alter this result short of direct military intervention on the ground in Ukraine, a course of action that has already been ruled out by NATO’s leadership and all major members of the alliance.

Peace talks between Moscow and Kiev are ongoing, but unlikely to yield any fruit for the time being. Both sides seem to believe that now is not the time for a negotiated settlement. The invading Russian forces have not made nearly enough battlefield gains to force Kiev into the kind of capitulation agreement that would be acceptable to Putin. The Ukrainians, buoyed by unprecedented military and political support from Washington, say that they are winning and thus appear to be unwilling to concede any of Russia’s major demands concerning political neutrality, partial demilitarization, and the recognition of Crimea and Donbass. With talks faltering and no military breakthrough in sight, the conflict is quickly morphing into an immensely destructive war of attrition with grim consequences for the European continent and the post-Cold War international order.