Mariupol Is Proving to Be a Significant Test for Russian Capabilities 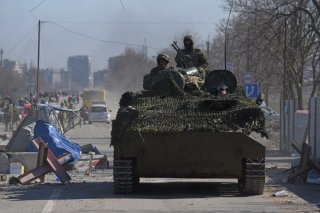 The city of Mariupol in southeastern Ukraine is barely still visible beneath the smoke, flames, and ruins of bombed-out buildings. The humanitarian disaster is devastating, yet the Ukrainians have still not surrendered the city and are refusing to be subjugated. The world has been captivated by the resolve and sheer intensity of the Ukrainians fighting for their homeland. Moreover, Ukrainian fighters are now taking back territory once occupied by Russians.

A senior Pentagon official said the United States assesses that the Russians are fighting desperately for Mariupol in order to create a corridor up the eastern side of Ukraine to connect the south with the Russian separatist areas in the Donbas region. A Pentagon report says the Russian strategy aims to cut off, pin down, or isolate Ukrainian forces. Yet, the invaders have still been unable to fully capture Mariupol despite the incredible devastation of their attacks.

“Russians are still bombarding [Mariupol] heavily with artillery and long-range fire … we continue to observe Russian forces inside the city, but … it's certainly not a majority of them, and the Ukrainians are also inside Mariupol and of course fighting very hard for it,” a senior defense official told reporters at the Pentagon.

However, Russian forces would need to be sustained and resupplied with fuel, food, and ammunition to execute this kind of strategy. Russian efforts to resupply their troops, however, are coming under heavy Ukrainian attack. CNN recently aired a video of a Russian warship in flames, reportedly destroyed by Ukrainian attacks. This could be a sign of a clear Ukrainian effort to target Russian supply lines, which is a tactic they have employed throughout the country.

The problem for Russia is that their resupply ships and ground convoys are quite vulnerable to Ukrainian ambushes and surprise hit-and-run attacks. This is a much-discussed reason why the Russian convoy north of Kyiv has stalled. It may be part of why the Russians are having trouble linking Mariupol to the Donbas region and other areas along the eastern coast of Ukraine. Convoys are inherently vulnerable, and this vulnerability may be part of why Russia appears to have resorted to long-range bombing instead of direct confrontation with Ukrainians. Knowing the streets, buildings, neighborhoods, and terrain, Ukrainians are likely positioned to defend their cities with a distinct advantage that they appear to be leveraging.

“Mariupol is contested with the Russians bombarding the city with artillery and other long-range fires. … There are Russian forces inside the city, but the Ukrainians continue to fight very hard for Mariupol,” a Pentagon report said.