Pentagon Says the Russian Convoy Heading to Kyiv Is 'Bogged Down' 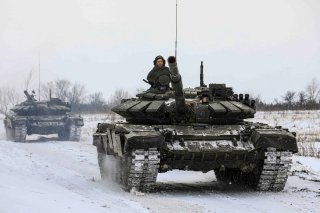 Are invading Russian forces now stalled and stricken by fuel and food shortages, sustainment challenges, and significant morale problems? The Pentagon says that is all possible amid reports that Ukrainian fighters are successfully engaging the invading force.

A senior Pentagon official told reporters that the Russian convoy heading south toward Kyiv is “bogged down” and dealing with logistics problems. “Our assessment is that it is not exactly moving with great speed, that they continue to be bogged down, coming down from the north, to get to Kyiv,” the official said.

The official also told reporters that, according to the Pentagon’s best assessment, the advancing Russian forces are challenged by the “resistance that they’re facing [and] the fuel and sustainment problems that they’re having.”

“We are also picking up signs that they're having problems feeding their troops; that they're—not only are they running out of gas, but they are running out of food. And we also believe that a part of the stall could be—and I emphasize the word "could"—could be a result of their own self-determined sort of pause in operations, that they are possibly regrouping, rethinking, reevaluating, that that could be part of it,” the senior Pentagon official told reporters, according to a Pentagon transcript.

They may also be having trouble countering or breaking through a highly motivated, tactically dispersed, and effective Ukrainian force armed with anti-armor weapons. Ukrainian forces may be staging ambushes and carefully staged hit-and-run attacks on approaching vehicles at key choke points where Russian forces may be more vulnerable.

By seeking to ambush Russian forces at intersections, bridges, and narrow passageways, Ukrainian fighters may be having success with tactics that the Iraqi Republican Guard employed during the U.S. invasion of Iraq, according to retired Lt. Col. Scott Rutter, an Infantry Battalion Task Force Commander who fought in Operation Iraqi Freedom.

In an interview with the National Interest, Rutter explained that the apparent difficulties being experienced by the invading Russian forces may be largely due to the tenacity of the Ukrainian forces and their will to defend their homeland.

“They're defending their homeland, let there be no doubt from what we're seeing. And what we're understanding is that they are going to fight to the death,” Rutter said.

Also, like the Pentagon, Rutter believes that Russia may have a serious morale problem. “I think the combat multiplier here is the reduction of discipline on the Russian side. And the focus and the pride and the efforts of the Ukrainian people and their reserve force that has been pushed forward, as well as their active force,” Rutter said.