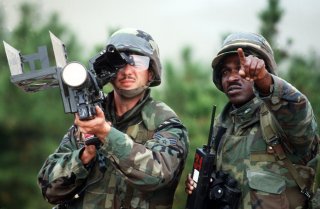 German chancellor Olaf Scholz pledged to fast-track 1,000 anti-tank weapons and 500 Stinger missiles to Ukrainian forces, according to a recent essay from Jeff Rathke, president of the American Institute for Contemporary German Studies at Johns Hopkins University.

The Stinger missile, made famous for its successful attacks against Soviet helicopters in Afghanistan in the 1980s, uses an infrared seeker with an ultraviolet capability. Over the years, the small missile—which can be shoulder-fired or fired from a vehicle-mounted launcher—has been used to attack helicopters, fixed-wing enemy aircraft, and other large targets.

In recent years, the U.S. Army has massively upgraded the Stinger missile to improve guidance, fire it from Stryker vehicles, and add a “proximity” fuse to enable the weapon to kill small moving drones in addition to helicopters and lower-flying fixed-wing aircraft.  Following several key Army and Raytheon upgrades, Stinger missiles have been able to destroy small drones using a new proximity fuze that allows detonation near the target. This could prove effective against a possible Russian drone swarm closing down on a civilian population, or function as a collection of mini projectiles to increase lethality. Firing with a range of approximately eight kilometers, the Stinger is faster than its larger counterpart, the Longbow Hellfire missile. Hellfire missiles, initially conceived of as anti-tank weapons, have a larger warhead. They are also now used for a wider range of enemy targets.

Several years ago, a Stinger missile fired from a vehicle-mounted Avenger System in a U.S. Army test destroyed a mini-drone more than one kilometer away using a proximity fuse—technology used to find and hit moving targets that are smaller than what the weapon has traditionally been used for.

Given that the time of travel and the speed of light are determinable quantities, a laser rangefinder from systems such as an Avenger can use a computer algorithm to determine the precise distance of a target, a former Army chief scientist explained.

Using the new technology, the weapon can now destroy mini-drones weighing as little as two kilograms, Army weapons developers told The National Interest several years ago when the Stinger was being upgraded.

The new proximity fuse introduces an emerging technology to expand the target envelope of the Stinger, which can use both a laser rangefinder and forward-looking infrared sensor when fired from the Avenger. Army weapons developers explained that a small antenna wraps around the warhead of the Stinger to “sense” when the munition detects movement and comes near a target, enabling it to detonate with a blast of small penetrating fragments. Shoulder-fired Stingers can only target at line-of-sight, whereas vehicle-mounted Stingers might have an expanded beyond-line-of-sight targeting capacity.

The Stinger can attack both soft and hard targets and can either have a delayed or immediate detonation sequence, developers said at the time of the upgrade. The weapon can fire by itself or be cued from another source using command and control technology.

Anti-aircraft ground fire from close ranges could give Ukrainian forces a distinct advantage in urban or mountainous areas, as individual groups of dismounted soldiers could hide in buildings or behind natural barriers to surprise and destroy Russian helicopters. For instance, should Russian helicopters attempt an air assault raid over the capital of Ukraine as part of a “decapitation strike” intended to destroy and replace the country’s leadership currently holding on in Kyiv, the Stinger could make a real difference.