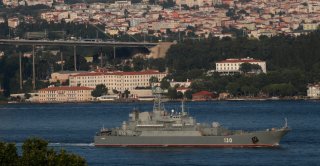 Regardless of whether talks between Russia and Ukraine make progress or fighting continues, the massive Russian invasion of Ukraine has become multi-domain, as Pentagon officials have confirmed that Russian forces conducted an amphibious assault from the Sea of Azov.

“We did observe the amphibious assault from the Sea of Azov to the west of Mariupol,” a senior Pentagon official told reporters on February 26, just before the talks were announced.

The official said the assault used only four vehicles; Russian landing ship tanks (LST) carrying troops and weapons came ashore from the Sea of Azov. “They actually have a little bit more than 10 LSTs in the Black Sea at least at last count. But we don't believe they used them all to conduct this particular assault. Our assessment was that they used four of their landing ships to conduct this assault,” the official said.

“We don't know how much naval infantry was on each one, we just don't have a perfect count. But I'm comfortable in saying … that this would involve several thousand naval infantry troops. But I can't be more specific than that,” the official said.

Ivan Gren-class amphibious transport LSTs, which first entered service in 2018, may have been used in the assault, according to a report in Naval News. “The class’ 135-meter vessels have a displacement of 5,000–6,000 tons and can transport up to 13 main battle tanks, 36 armored personnel carriers, and 300 marines,” Naval News reports. The ships are reportedly armed with close-in-weapons systems and 9K38 “Igla” man-portable surface-to-air missions. The modern LSTs are powered by 5200HP diesel DRRA-3700 engines.