The Army's Plan for Air Defense: Hellfire and Stinger Missiles Plus Lasers 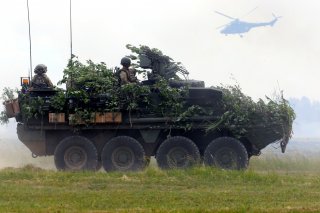 Here's What You Need to Know: The next stage focuses on arming Strykers with fifty-kilowatt laser weapons. This introduces new prospects for a precision attack upon enemy drones and an ability to attack and defend at the speed of light.

The Army is pursuing a three-tiered approach to arming its Stryker vehicles with cutting-edge air defense capabilities enabling the platforms to track and destroy enemy drones, helicopters and even fixed-wing airplanes.

This approach is called Maneuver-Short Range Air Defense (M-SHORAD). It’s an incremental effort to introduce powerful air defense weaponry into the Stryker vehicle to support infantry and armored units on the move against enemy air threats. The first segment of the multifaceted plan is already operational and now deployed in Europe. Increment 1 involved arming the Stryker with AGM-114 Hellfire missiles and FIM-92 Stinger missiles able to track and destroy enemy air threats, according to weapons developers. The Army recently achieved a milestone with Increment 1 of M-SHORAD by placing the first “tactical fire inside an operational unit,” Maj. Gen. Brian Gibson, the director of the Air and Missile Defense Cross-Functional Team, told the National Interest.

“The deployment includes the employment of multiple effectors such as Stingers,” Gibson said.

Building upon Increment 1, which arms the Stryker vehicles with a range of anti-air explosive weapons, the Army is fast progressing with Increment 2 of its M-SHORAD program. Increment 2 focuses on arming Strykers with fifty-kilowatt laser weapons. This introduces new prospects for a precision attack upon enemy drones and an ability to attack and defend at the speed of light. Lasers, if properly and fully integrated with the requisite mobile electrical power, are inherently scalable, meaning they can be adjusted to fully incinerate and destroy enemy targets or merely disable functionality. The Army has been working with several vendors to refine and strengthen its Stryker-fired laser and expects to have it operational within just the next few years.

Increment 3 will involve exploring the art of the possible regarding potential future interceptors. A modernization effort to look at a new generation of anti-air weapons could include advanced upgrades of current systems or a completely new redesign, something which could change the paradigm for ground-mobile counter air attack.

In total, the combination of all three increments amounts to a substantial Army effort to better prepare its advancing armored ground forces for heavy, mechanized, force-on-force combat against a sophisticated enemy.

“This is the largest modernization for air and missile defense since the Cold War,” Gibson said.