Javelins May Be Ukraine's Best Hope to Thwart a Russian Invasion 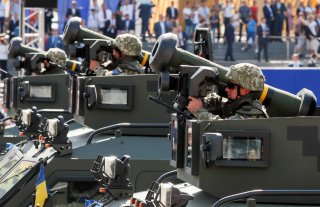 As Russian forces enter Ukraine as part of what President Biden called the “beginning of a Russian invasion,” Russian troops are positioned to attack from all directions, suggesting that a full-scale invasion of Ukraine may occur in the coming days.

The Pentagon has armed Ukrainian forces with a number of Javelin anti-tank missiles, which are often used by small, mobile units to destroy tanks from far distances. Javelin missiles, which were first used against Iraqi T-72 tanks during Operation Iraqi Freedom, have proven capable of destroying tanks in combat. The Javelin can be operated as a shoulder-fired weapon or be mounted and fired from tactical vehicles.

Could Ukrainian forces armed with Javelins stop or destroy invading Russian tanks? While they may be able to do so, a number of important factors must be considered. A quick look at the geography shows that eastern Ukraine is largely made up of plains and plateaus, whereas the western part of the country is mountainous. In order for Javelins to reach their maximum effectiveness, they must be fired from positions that are hidden by rocks, trees, or uneven terrain. With this in mind, eastern Ukraine’s terrain may make it a difficult location to carry out hit-and-run Javelin attacks on Russian tanks. Should soldiers attacking with Javelins be unable to conceal their points of attack, they could be more vulnerable to advancing Russian mechanized formations and less effective in stopping them.

The real margin of difference may lie in the range, image fidelity, and accuracy of the Javelin’s targeting sensors. If Javelin targeting systems or long-range sensors from nearby vehicles are able to precisely target approaching tanks from fortified positions, a number of Javelins could potentially impair an approaching column of Russian tanks. While Russian tanks may have the targeting capabilities necessary to track Javelin units, a tank cannon would struggle to accurately target small groups of mobile fighters. At the same time, approaching Russian ground forces would likely have air superiority and close air support, which could easily put exposed Ukrainian fighters at great risk of being killed from the air.

Although it is not clear if Ukrainian forces are receiving the most recently upgraded variants of the Javelin, any Javelin is likely to have a substantial impact on the ground. The Army’s ongoing upgrades to the Javelin anti-tank missile offer an interesting point of reference. Raytheon’s new Lightweight Command Launch Unit for the Javelin doubles its attack range. More recent innovations, slated to enter production this year, also incorporate improved sensor fidelity and a “fast lock” for carrying out attacks on the move. In addition, Army officials told the National Interest last year that the service is also engineering a new warhead for the Javelin.