Tanks for Nothing: Will Russia Go to War? 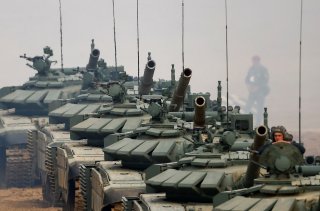 Russia’s armed forces have taken delivery of a new batch of modernized T-72B3M tanks, according to a state media report.

“Uralvagonzavod (part of the state corporation Rostec) has delivered a batch of T-72B3M tanks to the Defense Ministry of Russia,” according to a press statement issued by the manufacturer. “The vehicles have undergone a full set of trials, have been accepted by the customers in compliance with technical specifications and are ready for their operational service in the Russian Army.” The report did not specify where these tanks were delivered, nor how many units were part of this batch. The delivery comes amid an increasingly tense military standoff between Russia and Ukraine, with Kiev and the West accusing Moscow of massing as many as one hundred thousand troops on Ukraine’s border in anticipation of what could be a major military offensive. Russia’s Defense Ministry published a draft agreement earlier this month asking for sweeping security guarantees from Washington and the North Atlantic Treaty Organization (NATO).

The T-72 is a second-generation Soviet-era main battle tank (MBT), which is a development of the innovative-but-flawed T-64 tank. The original T-72 model boasted a top speed of around sixty kilometers per hour and an operational range of around five hundred kilometers.

The T-72 has spawned a constant stream of updated variants in the decades following its entry into service. The 1985 T-72B revision added a new main gun, upgraded engine, fire control system improvements, and slight tweaks to the armor construction. The T-72B3M is the latest iteration of the T-72 platform, bringing further fire control system updates with modern thermal imaging, digital display, Relikt explosive-reactive armor, and the newest version of the 125-millimeter 2A46M smoothbore gun.

The T-90 third-generation MBT was formally introduced in the early 1990s as the successor to the T-72, but upwards of two thousand models of the T-72 family continue to serve in Russia’s armed forces. Despite its aging foundation, the T-72 platform remains a staple in Russia’s heavy armor roster. Several thousand more remain active across the post-Soviet sphere, former Warsaw Bloc, Africa, and the Middle-East; notably, Iraq signed an import deal in 2009 for as many as two thousand refurbished T-72 tanks.

The T-72 platform has seen action in dozens of conflicts across the world, including the civil war in Tajikistan, Yugoslav Wars, and Chechen Wars. More recently, several of these tanks were reportedly spotted in eastern Ukraine during the early stages of the War in Donbass.