Will Putin’s Ultimatum Lead to War? 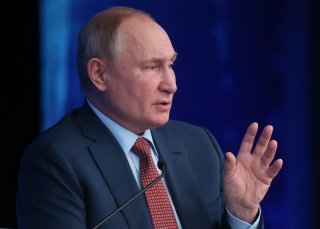 The Kremlin has published a draft of its security demands vis-à-vis NATO and Washington.

The proposals, which were submitted to NATO and U.S. officials earlier this week, call for sweeping concessions and guarantees from what Russian deputy foreign minister Sergei Ryabkov previously referred to as the “collective West.”

The document outlines two distinct legal agreements; one between the United States and Russia, the other between NATO and Russia. The agreement with Washington requires the United States to exclude the eastward expansion of NATO and to refuse the future admittance of any states belonging to the former Soviet Union. The relevant portion of the agreement with NATO covers similar themes but is worded slightly differently: “Participants that are member states of the North Atlantic Treaty Organization (NATO) undertake responsibilities to exclude the further expansion of NATO, including Ukraine as well as other states.”

Both the NATO and U.S. versions of the agreement prohibit the deployment of any foreign weapons and establishment of any foreign military bases, whether Western or Russian, in Ukraine and the former Soviet sphere. The document likewise prohibits the deployment of additional NATO forces outside the territories in which they were prior to NATO’s eastward enlargement in May 1997, except in exceptional circumstances and unless agreed to by both sides. “Our position is that we need to remove all this and return to the positions of 1997,” Ryabkov added. “Enough is enough.” The NATO agreement calls on all signatories to affirm that they do not regard one another as “opponents,” a term previously used by Ryabkov and other top Russian officials to describe the United States.

The Russian side has made clear that the Kremlin rejects any sort of piecemeal approach to the ongoing negotiations. “This is not a menu,” said Ryabkov:

Both texts are not formulated as a menu, where it is possible to pick and choose, they reinforce one another and must be evaluated in their totality. Various aspects of the alarming situation in Europe, the Euro-atlantic, and Eurasia are covered in of themselves. We regard as important this integrated, comprehensive approach to problems in the sphere of security and the integrated, comprehensive nature of the security guarantees to the Russian Federation must be preserved.

NATO’s Secretary-General Jens Stoltenberg said that the alliance has received the draft proposal, adding that any dialogue with Moscow “would also need to address NATO’s concerns about Russia’s actions, be based on core principles and documents of European security, and take place in consultation with NATO’s European partners, such as Ukraine.” Stoltenberg has already rejected Russia’s demand to formally rescind a 2008 NATO declaration that Ukraine will eventually become a member of the alliance; both NATO and the EU have previously signaled that they will not accept any legal prohibition on Ukraine’s right to seek NATO membership.

A senior White House official told the Washington Post that the Kremlin’s published demands are “unacceptable” and Moscow “knows that,” reportedly adding that it is “unhelpful” to conduct the negotiations in public.

Michael Kofman, director of the Russia Studies Program at the Center for Naval Analysis and a fellow at the Kennan Institute in Washington, DC, offered a bleak assessment of the ongoing talks on Twitter: “Moscow has not only been asking for things it cannot get, but in a way they know will ensure they cannot attain them. Serious negotiations are done behind closed doors. Something is very wrong with this picture, the pol[itical] side appears to be a smokescreen.” Kofman’s statement echoes the concern that the proposal, and the take-it-or-leave-it style in which it was delivered, is a kind of July Ultimatum that the Kremlin fully expects to be rejected by the West—that rejection could then be used as a pretext for further military escalation or future military action.

The draft was published on the heels of a large buildup of Russian forces on Russia’s side of Ukraine’s eastern border. Military experts and top Biden administration officials have previously assessed that Moscow could be slowly laying the foundation for a decisive military operation against Ukraine. “We don’t know whether President [Vladimir] Putin has made the decision to invade Ukraine,” said Secretary of State Antony Blinken said earlier this month. “We do know that he’s putting in place the capacity to do so on short order, should he so decide. So despite uncertainty about intention, and timing, we must prepare for all contingencies while working to see to it that Russia reverses course.”

White House spokeswoman Jen Psaki said the Biden administration will study the Russian draft proposal with “our European allies and partners.” Psaki added that the United States will not compromise “the key principles on which European security is built, including that all countries have the right to decide their own future and foreign policy free from outside interference.”

The Biden administration is expected to comment on the Russian proposals next week.