Imagine This: No World War I If This One Person Lived? 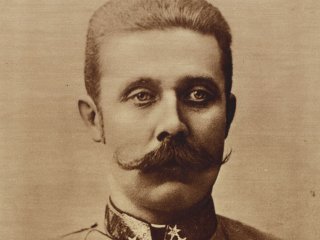 On the early summer morning of June 28, 1914, Archduke Franz Ferdinand—heir presumptive to the throne of the Austro-Hungarian Empire—was assassinated by Serbian nationalist Gavrilo Princip, one of a group of six members of a secret society known as the Black Hand. A question that has been asked for the past 106 years is whether that single event—one that was still quite significant yet not considered monumental at that particular time—was just an excuse rather than an actual catalyst for war.

In other words, would World War I have been avoided had Princip not—in a twist of fate—managed to succeed in killing Franz Ferdinand?

Unlike the questions of whether and even how Imperial Germany and the other Central Powers could have won the war—either earlier by not invading Belgium or later in the war by opting not to institute unrestricted submarine warfare—the issue is whether the death of this one leader really was that all significant?

It is also easy to look at Germany's efforts to become a major—even “super”—power; the rivalry between the navies of Great Britain and Germany; the way the alliances of great powers pushed Europe closer to war; and even the mere fact that Europe hadn't had a major war in nearly one hundred years.

All of the conflicts from the end of the Napoleonic Wars to the outbreak of the First World War—nearly one hundred years—had been relatively short affairs. While some of these were still deadly and certainly changed the map of Europe, resulting in the unification of Italy in 1861 and Germany in 1871, the weakening of the Ottoman Empire and created a new wave of nationalism, the wars were less “grand” in scale.

Instead of a Hundred Years’, Thirty Years’ or even Seven Years’ War, the nineteenth century (from 1815) saw conflicts that lasted months and in the case of the Austro-Prussian War just seven weeks! The only “long” conflict of the era was actually the Greek War of Independence, but it was mainly a guerilla-based war.

While Europe may have forgotten what it was like to fight a major war, there were other factors that suggested that the assassination of Franz Ferdinand was just an excuse. The idea that he was somehow so important is simply overstated.

The first point to address is that Franz Ferdinand’s assassination was what we could consider a “big deal” -- yet in the context of the era, he was still only the “Heir Presumptive,” albeit in this case he was treated as the heir apparent because there was unlikely to be someone having a better claim to the throne.

To the modern reader in the twenty-first century a life may seem like a life, and even today a “royal” in such standing must seem extremely significant. Yet the fact that Europe would go to war over the death of this individual is not only tragic but places too much importance on that individual.

While for an absolute monarchy at the time, the Heir Presumptive was overly significant given the fact that Emperor Franz Joseph I was eighty-four years old and his only son had committed suicide in a bizarre murder/suicide pact in 1889. With the death of Karl Ludwig (Franz Joseph’s younger brother), Franz Ferdinand had become heir presumptive in 1896 but soon after there a very serious royal rift.

Franz Ferdinand’s courtship to Sophie Chotek—who was a minor noble and only a “lady-in-waiting”—was considered an improper partner by the court and Franz Joseph was a stickler for tradition and unwilling to bend for something as trivial as love." This resulted in what was deemed a "morganatic marriage," which was one between people of unequal social ranks.

Today the world might not care if an English Prince married an American actress who was a divorcee – even if Prince Harry and Meghan Markle have stepped back from royal duties.

Yet, in 1900 this was a far "bigger deal" and as a result of the union between Franz Ferdinand and Sophie Chotek the happy couple had to renounce their descendants' right to the throne. Consider that England's future King Edward VIII had to give up the throne to marry the woman he loved, in this case Franz Ferdinand only gave up his son's right to be heir apparent!

This may not seem all that important given the fact that it became a moot point, and there have been historians who have suggested that once Franz Ferdinand became Emperor he could have changed the rules so that his children could have been included in the line of succession. There is even reason to believe that Karl Franz Joseph—nephew of Franz Ferdinand and future Emperor Karl I—wouldn't have contested such a move.

Yet, while Karl only became heir presumptive after his uncle's death, given the aforementioned situation he was always likely to be emperor even if the Hapsburg family had a morbid tradition of dying young. But Franz Ferdinand presented a problem for the court, and Franz Joseph never wanted his nephew to succeed him.

Gavrilo Princip made sure that didn't happen. And while the assassination of the heir – presumptive or otherwise – was seen as a slight to the very integrity of the monarchy it may have been a blessing in disguise.

Simply put for Franz Joseph I the death of the heir presumptive solved what he saw as a serious problem. It took a nephew he disliked—and more importantly a niece-by-marriage that he hated—off the board. Although the assassination is often played up as the catalyst it should be remembered that the Emperor only interrupted his holiday to deal with the affairs of state around the death of the heir but soon resumed his vacation.

The death of the heir presumptive was thus not important enough to disrupt the season.

It actually took several more weeks for Franz Joseph to be prodded by Germany's Kaiser Wilhelm II to finally act and issue the ultimatum to Serbia, which eventually resulted in the war.

Wave of Royal and Political Assassinations

Another factor that shouldn't be overlooked is that assassinations were shockingly not all that uncommon among the nobility and royalty of Europe in the nineteenth century. Assassins had tried to kill nearly every major European ruler and head of state including Franz Joseph, German Kaisers Wilhelm I, Friedrich Wilhelm and Wilhelm II, King Victor Emmanuel II of Italy and most notably Britain’s Queen Victoria, who famously survived seven attempts on her life!

Assassins did succeed in killing Czar Alexander II of Russia in 1881; while Empress Elisabeth, wife of Austria’s Franz Joseph took what could be described as the worst vacation ever as she was killed while on holiday in Geneva, Switzerland in 1898.

She had been warned that there might be possible assassination attempts, but she traveled anyway—and that most surreal part of the story is that her assassin, Italian anarchist Luigi Lucheni had originally planned to kill French Prince Philippe, Duke of Orléans, who had a somewhat dubious claim to the French throne. When Lucheni missed his opportunity after the Duke had already departed from Geneva, he simply selected the next royal he could find!

It must also be noted that another of Franz Joseph’s brothers also met a tragic end—albeit not technically an assassination as much as execution. That would be Maximilian, who was nudged to become Emperor of Mexico and a de facto puppet for France. His career as a propped up ruler was short and ended with him facing a firing squad in 1867!

Also worth addressing is the fact that three U.S. presidents, including Abraham Lincoln, James Garfield and William McKinley were all killed by assassins in the fifty years preceding the First World War. Tragically world leaders meet untimely deaths, yet the world continued more or less unchanged.

While there are countless reasons to see that the powers of Europe were very much headed to war, it is not difficult to believe that another incident would have just as easily set off the powder keg as much as the death of a mere “heir presumptive” during an ill-timed trip to a remote part of Bosnia on that June summer morning.