Why Germany Lost World War I 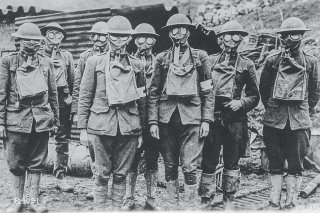 While historians will likely continue to debate the ways that Nazi Germany could have won the World War II—a topic that The National Interest has previously addressed—less considered is how Imperial Germany had a far better chance of victory in the earlier war. In the case of World War II, there are countless "what if" scenarios that could have brought victory to Nazi Germany, including simply not going to war at all, to not invading the Soviet Union.

There has been some discussion on the things Imperial Germany could have done to reach a different outcome including using its High Seas Fleet more effectively and not conducting unrestricted submarine warfare.

However, the real mistake lies in German strategy in 1914, which was formulated even before the war began. Unlike a generation later when Adolf Hitler and the Nazi high command actively sought to create a two-front war, Imperial Germany knew that a war with either Russia or France meant a war with both.

Thus was born the Schlieffen Plan, created by General Count Alfred von Schlieffen, chief of the Imperial German General Staff from 1891 to 1906. It called for a bold and swift invasion of France through neutral Belgium, which would capture Paris and knock France out of the war before Russia could mobilize and be a threat in the east.

It sounded good, but as history showed it didn't work. The British Expeditionary Force arrived in France sooner than the Germans expected and in a series of collective actions known as the Battle of the Frontiers in August 1914, the German lines were disrupted enough that Paris wasn't captured. Instead, the armies of Europe were forced to dig in, resulting in four years of hellish trench warfare.

With more than one hundred years of hindsight, we can see that the plan was doomed before it was launched, and it was one that presented more risk than reward. It is also something that should have been seen by German military planners. Nearly a decade had passed from when Schlieffen devised the plan and when it was put into action.

Notably, Great Britain moved closer to France and Russia—and it should have been obvious to anyone in Berlin that the British would come into the war to defend Belgian neutrality. The Schlieffen plan never really addressed that fact, but when Germany crossed the Belgian frontier the British declared war.

Even if somehow the British stayed out of the war the plan called for Germany to defeat France in six weeks! That assumed that the French capital could be captured, but clearly Schlieffen and the rest of the Imperial German high command failed to remember that the siege of Paris during the Franco-Prussian War lasted from September 19 to January 28. Why would it be expected that France wouldn't or couldn't hold out at least as long again?

Thus the better course of action for a victory should have been a swift move to the east, while defending the western frontier. Great Britain likely wouldn't have come into the war on the side of Germany and its Central Power allies, but historians have generally agreed that the doves in the cabinet—who did support war when Belgium's neutrality was violated—would have likely pushed for neutrality.

It is possible that the British Expeditionary Force could have been sent to Belgium as a de facto peacekeeping force to ensure neither side violated that neutrality.

France certainly would not, and really could not, have violated Belgian neutrality to invade Germany with British forces there, and likely wouldn't have invaded further than Alsace-Lorraine—the territories lost in the Franco-Prussian War.

Russia had mobilized far faster than Germany and Austria-Hungary expected, but bungled things in battle in the early stages of the war and saw an army destroyed at Tannenberg in Prussia. With the full might of the Germans and Austrians in the east the Czar may have been forced to the peace table by winter.

With its main ally out of the war, France may have settled for peace, potentially gaining back part of Alsace or Lorraine while giving colonial concessions to Germany. It is likely possible that David Lloyd George, the British prime minister, or Sir Edward Gray, the foreign secretary, could have been the peacemakers—potential Nobel Prize Winners for their efforts in the Treaty of London.

It could have potentially been a short war that spared millions of lives, and even stopped the rise of communism—although it is just as possible the Romanov monarchy in Russia may have collapsed anyway. Of course, it wouldn't have resolved all the underlying issues of the day and may have only pushed a truly "Great War" down the road a bit.