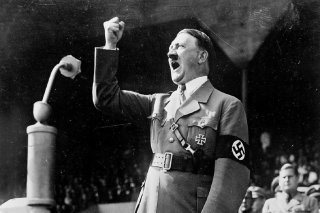 From the late spring to early fall of 1945 Europe saw several large "Victory Parades" that celebrated the defeat of Nazi Germany and the end of the Second World War. The Moscow Victory Parade on June 24, 1945, involved some 40,000 Red Army soldiers and nearly 1,900 military vehicles. The highlight of the event was the lowering of the captured German standards, which were flung down in front of Lenin's Tomb – to be trampled by Soviet marshals riding white horses.

The outcome could have been quite different. Instead of the four Allied powers – the United States, Great Britain, France, and the Soviet Union – then standing together in a final Allied Victory Parade in a defeated Berlin in September 1944, the Germans could have celebrated the defeat of the British, marching through London and Moscow as they did Paris.

Victory for the Allies was never guaranteed, and historians agree there were countless ways Germany could have won the war. Defeat never came down to one battle or one campaign. Germany's defeat came about from a number of much larger factors.

There is no denying that German industry was able to produce some very fine weapons and military equipment. This included such small arms as the MG34, MG42 and the world's first "assault rifle," the StG44. Yet, the Germans lacked in numerous other ways.

Nazi Germany had a powerful High Seas Fleet, but it was still really no match for the British Royal Navy and it never really could be. It was a great symbol of prestige for the resurgent Kriegsmarine, but the money and material could have been utilized in a larger U-Boat force.

During the Spanish Civil War, which has been called a dress rehearsal for the Second World War, Germany's Luftwaffe perfected its strategy of using dive bombers and close-support attack aircraft. This proved crucial in the Blitzkrieg against the Low Countries and France. But such aircraft were unable to defeat Great Britain. Germany built no heavy bombers and lacked any truly effective long range aircraft.

If Germany developed the right aircraft the war could have turned out differently, but another factor was its industry. While the United States quickly transitioned to a wartime economy that had companies like IBM making rifles instead of typewriters and GM making tanks instead of cars; Germany was producing consumer goods all the way until 1942 when Albert Speer took over as Minister of Armaments.

Adolf Hitler joined a list of would-be invaders of the British Isles but clearly didn't remember that no one successfully invaded since 1066 when William the Conqueror defeated Harold II, the last crowned Anglo-Saxon king of England. Various French Kings conducted some raids, the Spanish planned to use its Armada, the Dutch managed to at least burn some English warships in the Thames but even Napoleon never dared mount what would have been a futile invasion.

Without landing craft – another example of wrong equipment – and lacking control of the skies of Great Britain, an invasion by Germany was simply impossible.

With Great Britain in the war it meant Germany was dragged into various side campaigns from Greece to North Africa. That bogged down the men and material that could have been used in the invasion of the Soviet Union.

Germany lost the First World War largely because it couldn't fight a sustained two-front war. After the defeat of Imperial Russia, which came as the result of the Bolshevik revolution in 1917, the German Army was able to move vast quantities of men to the western front and launched a final offensive in the spring of 1918.

The lessons from the First World War should have been enough for Hitler and the German high command, but the decision to invade the Soviet Union in June 1941 when the British were still undefeated was a colossal blunder. And yet, it almost worked. The German Army was practically at the gates of Moscow in late 1941.

Perhaps if it hadn't wasted time in securing Greece after Italy bungled that invasion, Germany could have launched the invasion of the Soviet Union a bit earlier. Yet, here again is a case of the wrong equipment. Germany invaded France with more horses than Napoleon had used in 1812!

More trucks weren't possible again because the nation wasn't on a war economy.

Then there is the fact that Germany lacked the winter clothing for its Army during that first terrible Soviet winter. There was another sad example of not learning from history.

Today to win a war even against a regional power there is a process that often involves "coalition" building. The First World War saw two factions of "great powers" square off. But when World War II has considered it is really Germany and Japan against most of the world.

During World War I – not to mention wars in European wars through the ages – Germany didn't really fight alone. It had Austria-Hungary, the Ottoman Empire and Bulgaria on its side. That proved to be fairly well matched against Russia, France, and Great Britain – at least in the early stages of the war.

World War II in Europe was Germany and Italy, which was joined by Finland, Hungary, Romania, and to some extent Bulgaria. There were the puppet states of Slovakia and Slovenia, volunteers from across Europe including neutral Spain, but all this was matched against Great Britain, France, Poland, the Soviet Union, and notably the United States. Throw in the fact that Germany's victories in Poland, Denmark, Norway, the Netherlands, Belgium, and France didn't really help – this tied down vast amounts of men and material that could have been better used on the frontlines in the Soviet Union.

Germany had to deal with resistance and partisan efforts, and as the tide of war turned its "allies" left the fight. Finland was only in the war to fight the Soviet Union, while the same was largely true of Romania and Hungary. Eventually, those nations got out of the fight and in the case of Romania joined with the Soviets against the Hungarians.

Italy was a reliable partner but its army was neither prepared nor even eager for war. As noted, it dragged the Germans into campaigns that were unnecessary including in Greece and North Africa, and then when Benito Mussolini's government was toppled Germany was forced to occupy its former ally.

Then there was the fact that its Axis partner, Imperial Japan, didn't join in fighting the Soviet Union. While the Japanese did draw away British resources to the Far East, which included the Commonwealth forces of Australia and New Zealand, as well as the Indian Army, this really didn't benefit the Germans all that much.

A Japanese attack on the Soviet Union, on the other hand, would have put Josef Stalin in the very difficult situation of also fighting a two-front war.

Even with everything noted above, Germany and its European partners could have still won the war were it not for Germany's declaration of war on the United States on December 11, 1941. It was really the only time Nazi Germany had actually declared war on an enemy, and it needed not to have happened.

Japan had attacked the United States, so Germany was never required to join with its Axis partner. By doing so it practically ensured defeat. The United States was never within striking distance of Germany and it should have been obvious that Japan couldn't mount an invasion of the American west coast.

Keeping America out of the war should have been the goal for Germany. Instead, the United States became the arsenal of democracy and Germany's defeat was all but assured.