Can Javelin Missiles Help Ukraine Fend Off Another Russian Invasion? 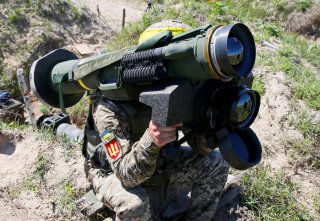 U.S.-built Javelin anti-tank missiles are pouring into Ukraine. The missiles could have a significant impact on the country’s ability to repel a Russian invasion.

Russia’s TASS news agency reports that the United States delivered 30 Javelins and 180 anti-tank missiles to Ukraine in October, a move suggesting a firm commitment on the part of the United States to support Ukrainian sovereignty now facing a growing Russian threat.

The TASS report quotes Pentagon spokesman John Kirby saying that the United States has asked Ukraine to use the systems responsibly and only for defensive purposes. Having these kinds of weapons could be crucial to any Ukrainian effort to repel a Russian advance. Javelins could fortify and support Ukraine’s roughly 2,000 tanks by adding an asymmetrical or non-linear defensive anti-tank option. Javelins use explosive heat charges detonating upon impact at ranges beyond several miles. Javelins could potentially be vehicle-mounted. However, they are primarily for dismounted maneuvering infantry which could otherwise be vulnerable to heavy incoming enemy fire from tanks.

With Javelins, some of Ukraine's 900,000 reserve soldiers (according to Global Firepower) could learn how to use them and disperse along known tank routes to slow down, interrupt, weaken or even destroy a Russian tank assault into Ukraine.  The United States has supported Ukraine with military aid for many years now, going back to 2014. According to TASS, the United States has allocated up to $2.5 billion for military support to Ukraine.

Washington supplies armaments to Kyiv and sends instructors to train the Ukrainian army. Ukraine received $350 million in U.S. military aid both in 2017 and 2018, $250 million in 2019, and $300 million in 2020. The country began receiving Javelin anti-tank missile systems after the administration of former U.S. president Donald Trump approved the sale of lethal weapons to Kyiv,” the TASS report says.

Javelin anti-tank weapons could definitely slow down any Russian tank assault but might not be able to stop it considering that Russia is reported by Global Firepower to operate as many as 13,000 tanks. This is a massive number, and any ultimate ability to stop them may need to require an additional approach. Such a mission would greatly benefit from superior air support. Ukraine is reported to only operate just above 2,000 tanks. However, if properly upgraded, equipped, and armed, a much smaller tank force could repel, defeat or simply slow down a Russian tank assault long enough for advanced Western assets to arrive.