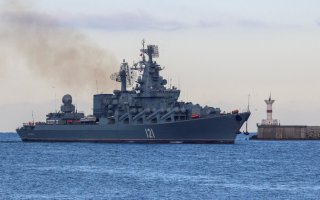 The Russian troop buildup on its border with Ukraine introduces the prospect of a large-scale land war. What would happen should NATO and the United States intervene to defend Ukraine in the event of a Russian invasion?

Because it borders Eastern European NATO countries, Ukraine could easily be accessed by heavy land forces moving into position along the Russian border. The United States and NATO already operate large numbers of F-35 Lightning II stealth fighter jets on the European continent. There is already a credible U.S. and NATO force within striking distance of Ukraine.

However, what about the Black Sea? There could easily be an extremely significant, yet easily overlooked Naval dimension to any engagement with Russia in Ukraine. Ukraine borders the Black Sea, an area where the U.S. Navy operates frequently. At the very least, heavy and precise firepower such as submarine and ship-launched Tomahawk missiles could bring enormous destruction to Russian forces along the Ukrainian border. This is particularly true now because the new Tactical Tomahawk is able to track and destroy moving targets, a scenario that could make advancing Russian forces vulnerable to an attack from the Sea. This seems extremely significant, given that Tomahawks can travel as far as nine hundred miles to a target. Areas deep within Ukraine and Russia would therefore be vulnerable to cruise missile attack from the ocean.

What about aircraft carrier support? This could be critical, particularly if there were not yet a large enough number of F-35s in Europe able to respond to a Russian attack. Clearly European F-35s could have a huge impact, and the U.S. Air Force has its own F-35s forward-stationed in Europe to support a growing number of F-35-armed NATO and allied countries. What if these forces were supported by carrier-launched U.S. F-35Cs or even amphibious assault craft-launched F-35Bs? Such a scenario, projecting airpower over Ukraine from the ocean to fortify a land war against Russia, could be a decisive factor in warfare.

A large mass of Russian ground troops might be vulnerable to a substantial carrier-launched air campaign, provided air superiority could be achieved. Russia operates fifth-generation Su-57 stealth jets. But do they exist in sufficient numbers to have a real impact? Could they truly rival or match the range, precision, and lethality of an F-35?

Why wouldn’t an amphibious assault on Russian forces in Ukraine from the Black Sea be a significant option? The U.S. Navy likely operates with maritime superiority over the Russians, and a Marine Corps amphibious landing could bring a two-front conflict for occupying Russian forces to contend with.  Should a beachhead of some kind be established, it could also offer a corridor of access for additional armed assets such as amphibious assault vehicles and other platforms. Should Russia have to defend NATO forces approaching from Eastern Europe and also fight off U.S. Navy attacks from the sea, they might have trouble holding any gains they might win in an initial invasion of Ukraine.