Not a Drill: Putin’s Going into Ukraine This Time 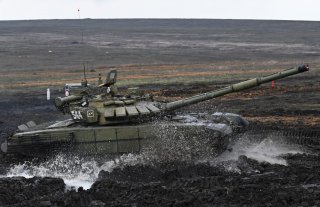 Washington is pretending that Russian president Vladimir Putin is bluffing about invading Ukraine. He isn’t, and he may strike before the new year.

There are at least four reasons why. Putin, as I wrote in November for Foreign Affairs, is thinking about his legacy. Great Russian leaders grab land. Second, he doesn’t see anyone stopping him. Third, he’s convinced that Ukraine isn’t a real country. Fourth, Putin hasn’t been able to get a deal out of Ukrainian President Volodymyr Zelenskyy, and Putin sees approval for NATO membership in Ukraine only growing.

Team Biden has tried to cool down the situation, but it hasn’t worked. The number of Russian forces on the border continues to increase.

After alarming Washington and Europe, Putin demanded an audience with President Joe Biden. He got it. The two heads of state talked for two hours on December 7 via video conference. Biden promised to throw a nasty package of sanctions at Russia, put more arms in Ukraine, and increase NATO’s footprint in Eastern Europe if Putin invades again.

The foreign policy establishment held its collective breath and beseeched the heavens that Biden’s threats would do the trick.

A few days after the video call, Russia made public two draft treaties—one between Russia and the United States, and one between Russia and NATO—that looked a lot like an ultimatum. Among other non-starters, one demanded that NATO relinquish any further expansion. The Kremlin asked for Washington’s immediate attention and even offered to meet in a third country the next day to discuss the proposal.

Moscow pressed on. On December 20, Russian diplomats threatened that there will be real consequences if Moscow doesn’t get the response it seeks.

The State Department, true to form, has played for more time. It said that the administration would likely meet with Moscow to discuss the proposal in January.

Meanwhile, the saber-rattling in Moscow continues. Today, Putin threatened to deploy military force to counter the NATO “threat,” even as he insisted he wasn’t delivering an ultimatum, and blamed the West for tensions in Europe. “What is happening now…is their fault.” The narrative of a blameless Russia wronged by the West is a favorite Putin trope, and an effective one. 50 percent of the Russians blame NATO and the United States for the escalation, according to Levada Center polling. Only 4 percent say Russia bears responsibility.

But there’s more to worry about than just the high-level rhetoric. Washington needs to pay attention to the discussions within Russia.

It’s no secret that Russia has ratcheted its rhetoric up since Putin’s summer essay denying the very concept of Ukraine’s sovereignty. Putin argues that Russians and Ukrainians are the same, questions the legitimacy of Ukraine’s borders, and posits that modern Ukraine rests on Russia’s historical lands. Since then, he’s claimed that it doesn’t matter who runs Ukraine since an aggressive nationalist minority is in charge. Dmitry Medvedev, the former president and prime minister, took pen to paper and said that engaging with Ukraine’s leaders is “meaningless” since Ukrainian identity is fake, and the country is under foreign control. Vladislav Surkov, Putin’s former ideologist, opined that the laws of physics compel Russia to expand as it once did under Ivan the Great and Josef Stalin.

Over the weekend, Telegram commentator and former defense minister of the so-called Donetsk People’s Republic Igor Strelkov argued that Russia should go big, taking an enormous swath of Ukraine from Kharkiv in the north, down to Dnipro along the Dnipro river to Odesa on the Black Sea because it would deprive Ukraine of its access to the sea, a majority of its industry, one-third of its population, and a significant part of its armed forces who hail from the east. Snatching this chunk of Ukraine would yield “serious dividends” for Russia by increasing its own population and defense industry.

The more extreme its rhetoric gets, the greater the concessions the Kremlin will have to extract to stand down. Biden faces the opposite equation—the more the Kremlin dials up the pressure, the weaker he looks if he gives in.

Putin hopes to inflict a grievous blow on the international order. Is there anything that can deter him? Yes. Putting NATO battalions in Poland and Romania now while hardening Ukraine’s defenses is the key. T.X. Hammes is urging Kyiv to focus on hardening its vulnerable northern border with mines, IEDs, and drones.

Give Putin credit: he smells weakness in Washington, Europe, and Ukraine. There’s never been a better time to reclaim his “historic lands.” Will we let him?