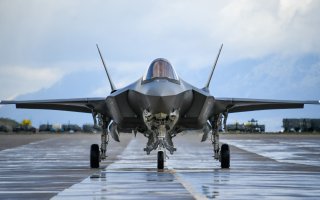 If this threat already exists, then what danger would Russia pose should the United States and its coalition of allied European partners not have F-35 jets? How much would that change the threat equation? Would the absence of F-35 jets catapult Europe into new dimensions of vulnerability? The answer is obvious. It’s clear that the collective impact of a multinational F-35 force may be sufficient to deter potential Russian aggression.

The question seems quite relevant to the threat equation for Europe and may explain why more countries such as Switzerland are acquiring F-35 jets. There are many reasons for this. First and foremost, there is the networking potential among allied F-35 nations—to include the UK, Norway, Denmark, Belgium, Poland and Switzerland. Of course, the stealth and fifth-generation characteristics of the F-35 jet present attack possibilities as well as a counterbalance to Russia’s Su-57 fifth-generation stealth fighter jet.

A networked web of European F-35 jets, integrated through a common Multifunction Advanced Datalink could cover an expansive geographic scope potentially sufficient to thwart any kind of large-scale Russian land advance. Russia’s land army is known to be quite large and technologically sophisticated. While that army may be matched or outgunned by a NATO ground force of M1 Abrams tanks and multinational troops, artillery, drones, helicopters, and armored vehicles, the existence of a combined F-35 air assault might prove to be the most decisive factor in preventing a Russian attack.

Without a coalition of F-35 nations, NATO could wind up being extremely vulnerable and cede air superiority to the Russian Su-57. The F-22 Raptor is arguably unparalleled but it is only available to the U.S. Air Force and there may not be enough of them to thwart Russian aggression. Also, the absence of the F-35 jet would deprive NATO of some very key surveillance, networking, and air-ground coordination. The jet’s sensors and drone-like surveillance technology are formidable. Thus, a fleet of F-35 jets could be key to multi-domain operations in any kind of combat circumstance. The jet’s ability to share information and support ground forces from the air changes the deterrence equation. This presents potential warfare dilemmas likely to cause Russia pause should it contemplate any kind of an attack in Eastern Europe.