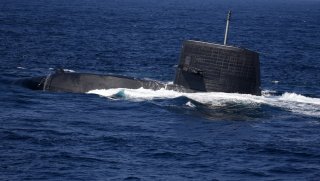 The Navy is massively fast-tracking a new fleet of unmanned underwater vehicles to more safely perform a range of submarine-like missions to include reconnaissance, countermine operations, and even undersea attack.

Drone submarines provide an unprecedented mix of additional attributes of great relevance to maritime warfare. A principal element of this is endurance. After all, unmanned submarine-like drones can operate for months at a time given that they do not require crew shifts.

Now, the Office of Naval Research and General Atomics Electromagnetic Systems are working together to provide the emerging Large Displacement Unmanned Underwater Vehicle with advanced power for propulsion and energy storage systems.

The LDUUV mission, according to a 2015 study from the International Journal of Advanced Research in Artificial Intelligence is to “conduct missions longer than seventy-days in open ocean and littoral seas, being fully autonomous, long-endurance, land-launched with advanced sensing for littoral environments,” a paper called “Military Robotics: Latest Trends and Spatial Grasp Solutions” from the National Academy of Sciences.

In a company statement, GA-EMS explained that the new high-tech integration is intended to improve undersea drone performance, to include extended endurance. “Over the course of the last two years, the motor has undergone lab testing, and power system has completed underwater testing. Both systems have performed successfully, demonstrating capabilities to both power and propel underwater vehicles. Together, the systems are proving to be key technologies to provide the combined power, energy density, and improved vehicle performance necessary to help meet the objectives,” Scott Forney, the president of GA-EMS, said in the statement.

The study emphasizes “long endurance” and “autonomy” as signature features of large undersea drones, something which can of course extend the length of time possible for undersea surveillance missions. Larger drones may also be engineered with a stronger propulsion system to maneuver undersea. At the early stages, launches will begin on land before slowly migrating toward ocean launches as part of a networked manned and unmanned group of vessels. The emergence of these kinds of systems will of course greatly inform tactics and strategies as they can massively multiply undersea presence without necessarily increasing risk. Large undersea drones may also quite likely be configured to fire weapons such as torpedoes, especially if they are networked with undersea “host ships” or “mother ships.”

Manned submarines can function in more of a command and control capacity to a large extent, operating as motherships able to operate a large fleet of surface and undersea drone boats.