The Army Has Plans for the Patriot Missile 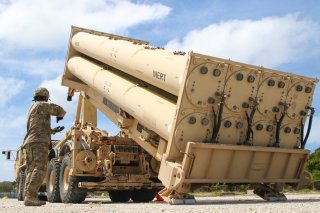 IBCS interconnects sensors and radar “nodes” to share information across otherwise disaggregated defensive locations. For instance, a Patriot interceptor missile or Sentinel radar can quickly share threat-tracking information across expansive and otherwise disconnected areas. IBCS is slated to reach operational status as soon as next year.

Given the success of recent tests and development efforts, Army Futures Command has been expanding the reach and purview of IBCS. The system will incorporate multi-domain nodes such as Marine Corps radar and even Air Force F-35 fighter jets, Daryl Youngman, the deputy director of the Air and Missile Defense Cross Functional Team, told the National Interest.

“IBCS is seen by the Army as a significant contributor to JADC2, as it will replace multiple disparate systems. It will provide friendly protection, shared understanding, common mission command, improved combat ID and improved joint integration,” Youngman said.

Historically, radar or threat-tracking information has been sent from a single node to a command and control center in position to then re-transmit the data to the appropriate platform or weapons system. This can create latency and slow down real-time target sharing. It can also increase vulnerability by virtue of needing to transit multiple destinations.

“With the kill web we are using different sensors to engage a missile they were never designed to work with,” Jerome Dunn, Northrop Grumman’s director of Strategy and Technology for Combat Systems and Mission Readiness, told the National Interest.  We used a GATOR and F-35 radar fused into an IBCS track to engage a Patriot missile.”

Northrop Grumman is the defense contractor that is building IBCS. The company recently tested the system with the Army.