When It Comes to Air Assault, Ukraine Could Give Russia a Run for Its Money 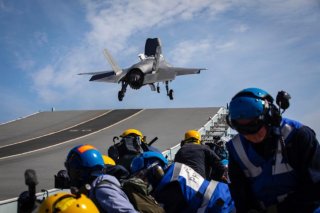 Such an effort may or not be entirely feasible, depending upon the state of Ukrainian weapons, air defenses, or ability to counter approaching Russian helicopters from the. Nonetheless, Russia seeks to be prepared for the contingency, which is why it has planned large-scale paratrooper air assault drills over Crimea in the coming weeks, according to Russia’s TASS News Agency.

“During the drills, the paratroopers will also practice air assault operations aboard helicopters to seal off a captured area and provide for a quick advance of the main forces, which will be carried out with the fire support of army aviation (Mi-35 gunships),” the paper says.

Advancing helicopters, planes, and gunships filled with paratroopers may or may not be realistic for Russian forces potentially seeking to establish a point of entry for attacking forces.

Despite its status as a major global military power in possession of fifth-generation aircraft and a large, trained land force, Russia could likely encounter some difficulty should it seek to invade Ukraine with an air assault. Ukraine is by no means a major world power but does have a substantial force capable of causing serious problems for attacking Russian forces. A look at Global Firepower says Ukraine operates as many as 2,430 tanks and as many as 11,000 armored vehicles and 2,000 pieces of towed artillery.

Ukrainian ground forces, however, might at least have some initial success in fending off a Russian armored attack given that they have a sizeable fleet of armored vehicles and several thousand tanks. Russia could invade with reportedly superior T-14 Armata tanks, yet it is not clear how many of these tanks Russia operates, so the bulk of an attack force would likely consist of upgraded T-90 and T-72 tanks. Without Close Air Support or established air supremacy, Russian tanks and armored forces might have trouble breaking through Ukrainian defenses.